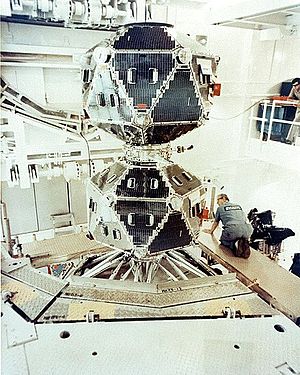 The Vela-5A/B Satellite in its cleanroom. The two satellites, A and B, were separated after launch. Image/wikipedia.com

WASHINGTON, D.C. – The National Nuclear Security Administration (NNSA) this month commemorated the 50th Anniversary of the Vela satellite launch, the U.S.’s first treaty monitoring satellite. The purpose of Vela was to monitor compliance with the 1963 Limited Test Ban Treaty, a cornerstone arms control treaty which prohibits nuclear weapons testing in the atmosphere, in outer space and under water.

The original Vela contract called for 10 satellites at the cost of $15 million. The first six satellites were so successful, reliable and durable that the last four were never launched. In 1965, the Department of Defense approved an advanced Vela program equipped with more capable detectors, including optical flash detectors. Overall, twelve Vela satellites were launched—the last pair on April 8, 1970.

The instruments aboard the Vela satellites provided significant scientific data. Examples include the first measurements that lead to the discovery of naturally occurring gamma ray bursts, data on trapped radiation within the Earth’s magnetosphere, and data on major lightening storms and bolides.

The Space Nuclear Detonation Detection mission continues with systems aboard Air Force GPS and Defense Support Program platforms. The last of the advanced Vela satellites was deliberately turned off on Sept. 27, 1984—more than 15 years after the first satellites were launched.