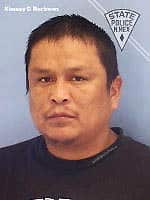 New Mexico State Police officers were dispatched Dec. 16 to the Circle K in Cuba to perform a welfare check on an occupant of a pickup.

In the pickup they found Kimsey Barboan, 33, of Cuba. Barboan appeared intoxicated and had a laceration across his forehead. Barboan told officers he had been assaulted by a group of unknown males.

During the interaction officers noticed a baseball bat with blood on it as well as a rifle in the pickup. Barboan, was taken to Sandoval County Regional Hospital where he received treatment for the laceration. Barboan was then booked into Sandoval County Detention Center for charges of Felon in Possession of a weapon, DWI, Driving on Revoked License, and Open Container. Barboan also had two active Felony Arrest warrants for Aggravated Battery.

Two days later at about 11 a.m. Dec. 18, a 911 call was placed to the Sandoval County Sheriff’s Office reporting that friends found Anthony Martinez, 61, of Cuba deceased at his home near Cuba. Sandoval County deputies responded and found Martinez deceased on the floor of his residence. It appeared that Martinez had suffered blunt force trauma. Deputies noticed that a struggle appeared to have taken place inside the home. The deputies secured the scene and the New Mexico State Police Investigations Bureau was requested to investigate.

Barboan continued to say when he left the residence, Martinez was on the ground making groaning noises. Barboan then took the bat and left the residence. After the altercation, Barboan did not attempt to call for medical treatment for Martinez. In addition to the previous charges, Barboan also has been charged with an Open Count of Murder and Tampering with Evidence.

This case remains under investigation by the New Mexico State Police Investigations Bureau with no additional information available at this time.