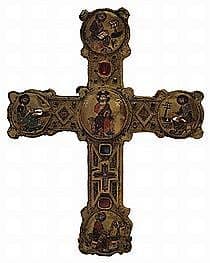 Following a flurry of media stories earlier this week, the New Mexico Department of Transportation has apparently reversed its decision to block the installation of artistic panels on two bridges in Jemez Springs.

At issue was the fact that the artistic panels contained crosses.

NMDOT sent a brief email to the mayor of Jemez Springs Thursday reversing its decision:

The Federal Highway Administration New Mexico Division Office has no issue with the art associate with the highway construction project in Jemez Springs. The appropriate process was followed. The public was involved and no controversy exists. /s/ Don Martinez, Division Administrator FHWA NM.

It appears the controversy has ended. Hall said this morning in an email that “it was nice to see the change.”