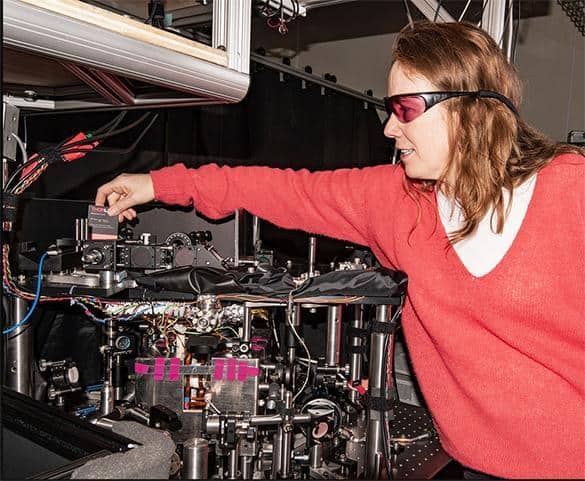 NIST physicist Elizabeth Donley holds a card used to trace the paths of laser beams in the atomic gyroscope. The atoms are in a small glass container inside the magnetic shield box with the pink tape on it. Photo byJ. Burrus/NIST

Researchers at the National Institute of Standards and Technology (NIST) have upgraded their compact atomic gyroscope to enable multitasking measurement capabilities and measure its performance, important steps toward practical applications.

Described in a new paper, the quantum gyroscope design and evaluation processes were led by three women — a highly unusual situation in physics and a source of pride for project leader Elizabeth Donley at NIST. Postdoctoral researchers Yun-Jhih  Chen and Azure Hansen totally rebuilt the apparatus over the past couple of years.

“Not only did we build a simple quantum gyroscope, but this is the first time anyone has demonstrated simultaneous measurement of rotation, rotation angle and acceleration with a single source of atoms,” Donley said. “Other gyroscopes, including the classical ones currently used in phones and planes, can measure only one axis of rotation. This is also the first time we’re reporting a sensitivity for the acceleration and rotation measurements.”

The NIST team previously measured rotation with an earlier version of the quantum gyroscope. The apparatus was upgraded to boost the signal strength and data acquisition speed to enable competitive sensitivity measurements. Researchers also added a pattern recognition algorithm derived from machine learning to automatically extract information from images of the atoms.

The NIST gyroscope is an atom interferometer, taking advantage of the fact that atoms can act as both particles and waves. Rotation and acceleration are deduced from images of interfering matter waves (which show the probability of a particle’s position in space) from atoms in two different energy states.

Atom interferometers could be used in navigation and geodesy (the study of the shape of the Earth based on measurements of gravity) because of their sensitivity to acceleration and rotation combined with their long-term stability and accuracy. The development of small, lightweight, low-power atom interferometers is key to moving the instruments out of the laboratory to applications in the field.

The NIST team developed a simplified scheme amenable to portable applications using a single, tiny cloud of atoms that falls by only a few millimeters during the measurements. A glass chamber just 1 cubic centimeter in volume contains about 10 million cold rubidium atoms that are trapped and released.

Currently, a full-size optics table is required for the lasers, and a few racks of electronics are needed as well. The laser setup would need to be made more compact and integrated before the gyroscope could be used in the field, Donley said. Other research groups are reducing the size of these laser systems, she added.

The NIST gyroscope’s sensitivities for the magnitude and direction of the rotation measurements are 0.033 degrees per second and 0.27 degrees with one second averaging time, respectively.

These results are approaching the sensitivity levels achieved by other research groups using much larger atom interferometers, Donley said. Moreover, the NIST gyroscope is unique in that it can measure rotations along two axes and an acceleration along one axis simultaneously with a single source of atoms.

In the NIST gyroscope, when the atoms are first trapped in a cloud and then released to fall under gravity, a laser beam causes them to transition between two energy states. This process involves absorption and emission of light particles, which gives the atoms momentum and causes their matter waves to separate and later recombine to interfere. When the atoms speed up or rotate, their matter waves shift and interfere in predictable ways, visible in images of the expanded cloud.

The atoms are imaged by shining a second, weak laser beam through the cloud. Because atoms in different energy states absorb light of different frequencies, the images show interference bands of atom populations in the two different states. The rotation rate and rotation axis are measured by analyzing the spacing and direction of the interference bands across the atom cloud. Acceleration is measured from changes in the position of the central band. The interferometer is sensitive to acceleration along the direction of the laser beam and sensitive to rotations perpendicular to the beam.

The instrument could be used as a gyrocompass, because the atoms sense rotation in the plane tangential to the surface of Earth. The rotation signals, due to the Earth’s rotation, point north, as is useful in navigation.