NFWF: $1.1 Million Plus In Grants To Help Bats 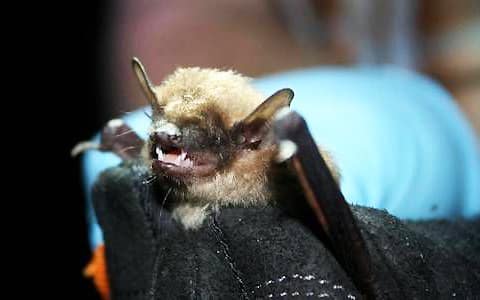 A big brown bat shows the telltale symptom of white-nose syndrome. This mysterious disease is obliterating entire bat colonies as it spreads across North America, and scientists say time is running out to save these ecologically and economically important mammals. Source: mnn.com. Courtesy/U.S. Fish & Wildlife Service

BIRMINGHAM, AL – On the eve of Halloween, the National Fish and Wildlife Foundation (NFWF) has announced more than $1.1 million in grants to combat white-nose syndrome (WNS) and promote the survival of bats in North America.

The grants were announced at the Ruffner Mountain Nature Center in Birmingham, Ala., where Bat Conservation International (BCI), one of the grantees, is working with two non-toxic anti-fungal agents, ultraviolet light and polyethylene glycol, as a way to reduce the impact of WNS. This project builds on promising research funded last year.

“The Bats to the Future Fund has been a game-changer for advancing research on potential solutions to help bats survive the devastating impacts of white-nose syndrome. Bat Conservation International is working with several research partners to test novel solutions and assess the efficacy and feasibility of delivering solutions to bats in need, ” said Dr. Winifred Frick, Chief Scientist at Bat Conservation International. “Our latest grant builds on work by Dr. Dan Lindner of the U.S. Forest Service and Dr. Barrie Overton at Lockhaven University to test two methods, ultraviolet light and non-toxic polyethylene glycol, to remove the fungus that causes WNS from mine walls where bats hibernate. At BCI, we believe building collaborative teams and working on multiple solutions is key in this fight when every year matters for saving our bats from WNS.”

The projects supported by the four grants announced today will test four different environmental treatments, as well as further develop a vaccine test to help manage the disease and improve survival and recovery of affected bat populations. In addition to Birmingham, experimental treatments will be deployed in Arkansas, Colorado, Minnesota, Texas, Wisconsin and Ontario, Canada.

Millions of bats have died over the past decade from WNS, which is caused by a cold-loving fungus that attacks hibernating bats. In some sites, the urgency is disturbingly evident — up to 100 percent of bats have disappeared. More than half of the bat species in the United States and Canada hibernate to survive the winter, making them potentially susceptible to WNS. Without a solution, several bat species may be in danger of extinction.

The grants were awarded through the Bats for the Future Fund (BFF), a public-private partnership between NFWF, the U.S. Fish and Wildlife Service, the U.S. Forest Service, Southern Company and the Avangrid Foundation.

“The Bats for the Future Fund is supported by a diverse mix of public and private interests who have pooled their resources in order to prevent more bats from becoming infected,” said Amanda Bassow, NFWF’s Northeastern regional director. “These four projects demonstrate short term strategies to hold the line against this terrible disease, while also developing a long-term solution.”

Since signs of WNS were first observed in upstate New York in 2006, the disease has spread rapidly, moving steadily westward across the U.S. and into Canada. WNS has now been confirmed in 33 states and seven Canadian provinces, with detection in new locations continuing each year.

“White-nose syndrome remains one of the most pressing conservation challenges to bat conservation in North America, “ said Dr. Jeremy Coleman, National White-nose Syndrome Coordinator for the U.S. Fish and Wildlife Service. “As the disease continues to spread and affect additional species, the urgency to develop effective management tools has spurred on innovative research and brought together many promising creative partnerships.”

“Bats provide incredibly valuable ecosystem services to our society’s well-being.  Many agricultural crops and native plants depend wholly or partially on bats to pollinate their flowers or spread seeds.  Bats also help control damaging or bothersome insect pests.  Addressing the decline of bats across North American is one of the most important conservation efforts that private sector partners, the States, Tribes, and Federal agencies can agree to and work together on,” said Rob Harper, National Director for the Water, Fish, Wildlife, Air, and Rare Plants staff of the USDA Forest Service.

“Southern Company is committed to conserving and protecting at-risk species and their habitats,” said Jason Reynolds, director of Environmental Affairs for Southern Company. “Initiatives like the Bats for the Future Fund, which support wildlife in the areas we serve and operate, help us make lives better – today and for future generations.”

About the National Fish and Wildlife Foundation

Chartered by Congress in 1984, the National Fish and Wildlife Foundation (NFWF) protects and restores the nation’s fish, wildlife, plants and habitats. Working with federal agencies, corporations, foundations and individual partners, NFWF has funded more than 4,500 organizations and committed more than $4.8 billion to conservation projects. Learn more at www.nfwf.org.