Newton: ‘Candide’ In The Best Of All Possible Worlds 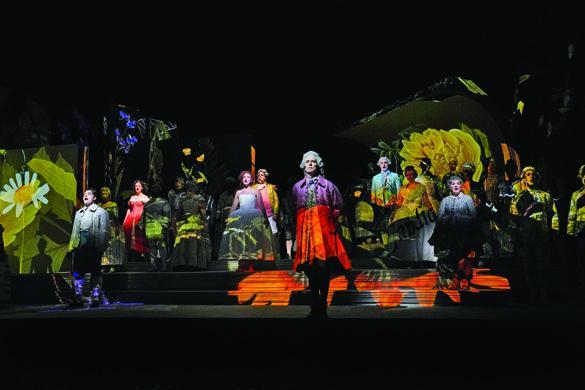 A scene from ‘Candide’. Photo by Ken Howard/Courtesy of Santa Fe Opera 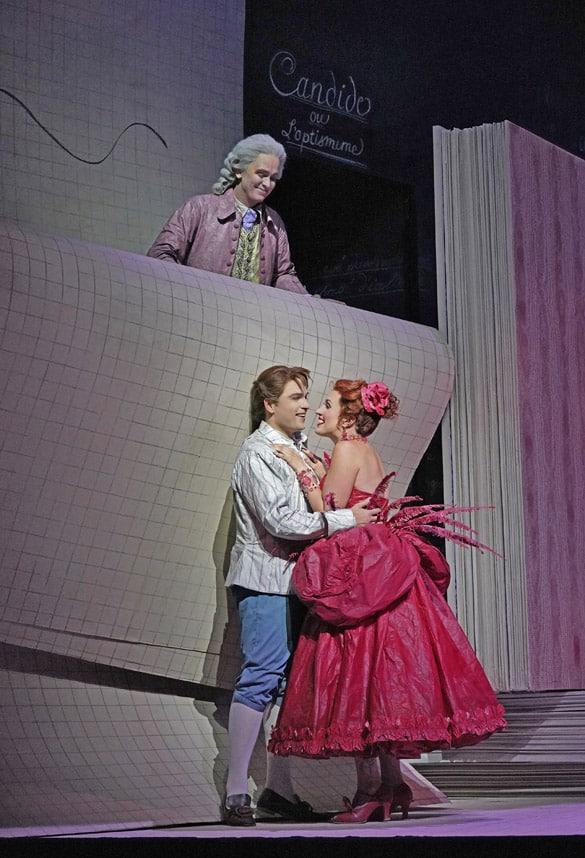 Beginning Friday’s opening was the Star Spangled Banner, conducted by Harry Bicket, before launching into the Candide Overture. That was especially appropriate for the composer of Candide, Lenny Bernstein, an American original, composer, conductor and educator extraordinaire.

Voltaire’s “Candide or Optimism” is a satirical novella, and this production is directed by the French director Laurent Pelly, who has previously delighted Santa Fe audiences with witty French repertoire.

The emphasis on Voltaire has morphed this Candide to sets and costumes that look like pages and books and writings. To pull off this feat, the production departments of the SFO succeeded with monumental challenges, and so the Director-Designers team came to the best of all possible opera companies to carry out their vision.

Consider putting paper costumes in an open air theatre with wind and rain. Missy West and her costume department went through many trials with materials to have costumes that are noiseless while the performers go through their paces. Tyvek is the wonder material that has the necessary qualities.

When Candide first appeared, Lillian Hellman and Bernstein were collaborators, and the epoch was when Junior Senator from Wisconsin Joseph McCarthy would find Communists everywhere he looked – government, Hollywood, composers and singers. Fear of having to testify before the House UnAmerican Committee, or producing works by suspected Communists or sympathizers was endemic in America. Bernstein was caught up, and Aaron Copland’s Fanfare for the Common Man and Lincoln Portrait were scrubbed from performance venues.

Candide with scenes of Inquisitions that heralded auto-da-fès (acts of faith that resulted in beheadings or burning of heretics) seemed to Hellman an example of McCarthyism.

A short time after the world premiere of Candide it was presented in the Wisconsin Union Theatre in Madison, where I first saw it. It underwent many revisions over the years, many authored by Bernstein, but Hellman’s vitriolic spirit forced her off the team, and when she died her obituary made almost no mention of Candide.

One of the great Candide performances was conducted by Bernstein with the London Symphony Orchestra and Symphony Chorus, and the video is dubbed the Final Revised Version, 1989, and Bernstein died the next year.

Duane Schuler, the lighting designer for Candide, told me there will never be a final version found in the history of productions.

The current production takes a lot of guidance from a 1988 Glasgow, Scottish Opera version. With scenes that encompass at least 16  locations around the world in 1758, a night at the opera will be quite long. The saving grace for staying with it all is Bernstein’s score, the direction of Bicket, the principal singers and the chorus of apprentices.

Alek Shrader as the eponymous character is masterful in every one of his scenes, and sometimes they incorporate some of Bernstein’s most appealing vocal passages, including the glorious finale. Schuler’s lighting and the super-hi-tech projections by 59 Productions, led by Ben Casey are other sensational highlights.

Counting two rehearsals and opening night, I’ve been privileged to see this Candide three times, and will make it four times next Saturday night. That will be the only time I will get to a Prelude talk by Oliver Prezant, whom I expect will reveal many features of Candide that I’ve yet to discover. 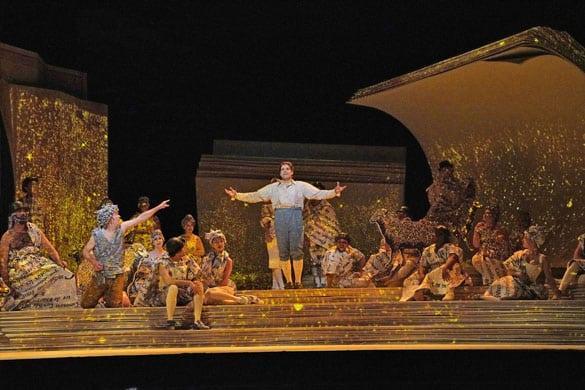