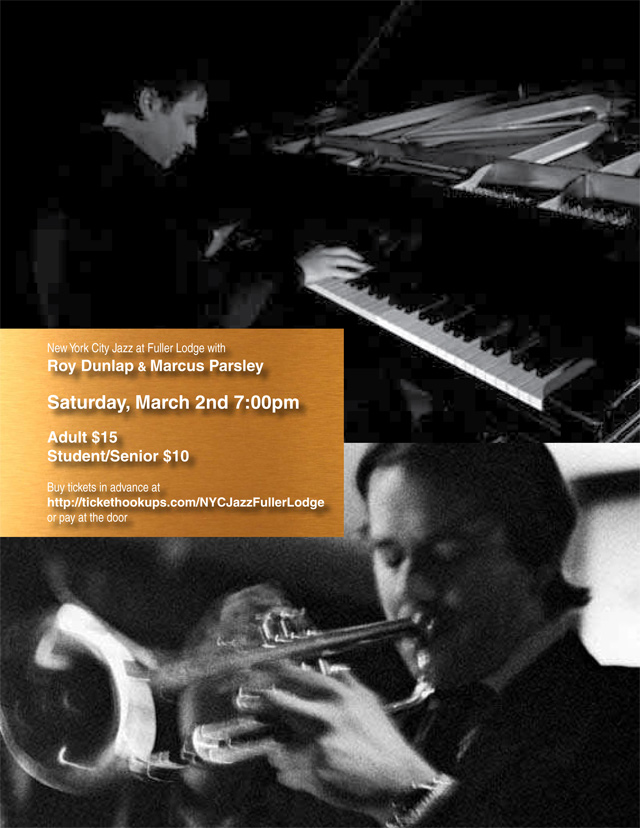 Roy Dunlap (piano) and Marcus Parsley (trumpet) are world-class musicians and Saturday’s concert will be a real treat for jazz lovers.

Local jazz musicians will open the show. Tickets are $15 ($10 for students and seniors) and are available at http://tickethookups.com/NYCJazzFullerLodge or at the door.

He recently performed with John Mayer in a benefit concert called “Stand Up For Heroes.” He is featured on numerous recordings as a sideman and leader of his own group. He currently lives in New York City where he teaches and performs regularly.

Parsley is a jazz trumpeter who has entertained audiences in 129 different countries and 29 states (soon to be 30 after Saturday’s show.)

He has spent the last 11 years residing in New York City where he entertained audiences at the legendary Carlyle Hotel on a regular basis the vast majority of that time.

He also found time to perform in a number of the famed jazz clubs that add to the cultural gem that is Manhattan. Performing with Loston Harris, John Pizzarelli, Ian Hendrickson-Smith, Roy Dunlap, soul legend Charles Bradley, Brooklyn hipsters The Menahan Street Band, his own groups and others have afforded him a broad musical palette.

Parsley cites Miles Davis, Chet Baker and Freddie Hubbard as primary influences while always striving to allow his personal voice to find it way home to the ears and hearts of his audience.

His first album as a leader is expected to be released this summer (2013) by the Cellar Live jazz record label.