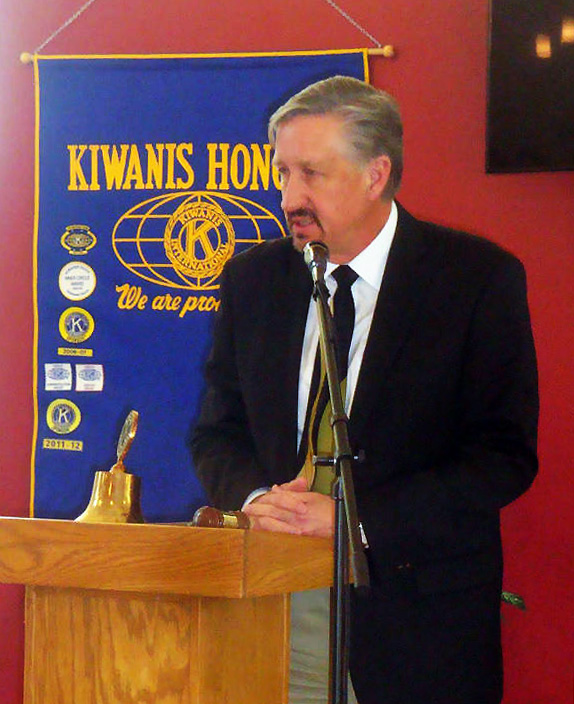 Wynn Goering, new chief executive officer for the University of New Mexico-Los Alamos, told Kiwanis recently that he sees recruitment and recognition as vital opportunities for the branch—but he also recognizes the challenges that hinder success.

As a business, he said, UNM-LA must recognize that recruitment should emphasize the normal “college age” group. In Los Alamos County, however, the population has been stable at 18,000 for many years, and, as time passes, the percentage of Los Alamos people in older age groups is growing while the percentage of people in the younger categories becomes smaller. In effect, UNM-LA’s market is shrinking every year.

In addition, he said, the branch college is located in a “company town” dominated by Los Alamos National Laboratory (LANL), which, he said, “is built to keep people out.” The lab is unpopular with some of the people in surrounding communities, he said, although LANL is working to attract more people from neighboring towns.

The branch also has a problem with visibility. It recently lost a mil levy election, he said, in which, “Some voters didn’t know we existed.”

Goering, an English professor with extensive experience at other UNM branches (notably at UNM-Taos, where he was executive director), brought Kiwanis a pile of handouts filled with facts and figures showcasing UNM-LA’s accomplishments, and he spent time in his talk emphasizing some of those points. He noted, for example, that:

Rick Reiss (a member of the County Council as well as Kiwanis) asked, “How do you perceive relations between the (UNM) regents and UNM-LA?” Goering said, “They don’t know we exist unless something goes wrong.” Part of the “recognition” goal is to have more recognition by the regents, he said. He added, however, “They’re proud of the branches. They want them to do well.”

Linda Daly (a Kiwanis member who heads the Los Alamos YMCA) noted that, “Nursing and medical technology seem to have gone to Northern (New Mexico Community College.” She asked if UNM-LA would be expanding into those areas. Goering said accreditation requirements would make it difficult. However, he said, it might be possible, “If we can find a way to partner with Los Alamos Medical Center.” He noted that, “Everybody has a shortage of (nursing) instructors,” and he indicated that it would be good to find ways to “share resources.”

Goering also was asked how he is managing the fact that he lives in Albuquerque and works two days a week in Los Alamos. He said, “Every leadership model has its strengths and weaknesses.” He noted that he was working on the main campus but had worked at branches before he applied for this job. For the good of the Los Alamos branch, he said, he must be effective on the main campus.

He spoke highly of the good work that Lisa Wismer does for him in Los Alamos. “Let’s try this for a while and see if it works,” he said.