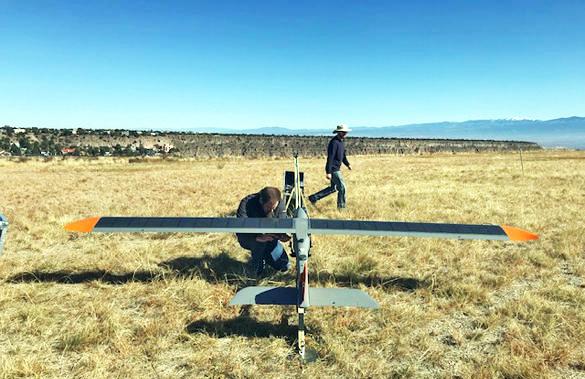 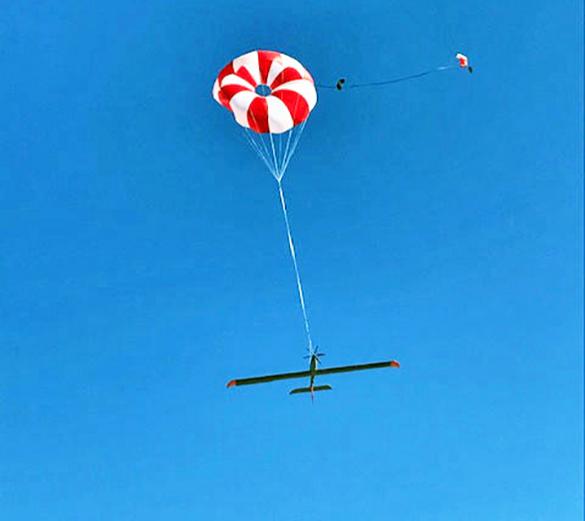 A parachute carries the drone back to the ground. Courtesy/LAC
By KIRSTEN LASKEY
Los Alamos Daily Post
kirsten@ladailypost.com

The pavement on airport runways and taxiways is essential; however, its maintenance and repair does not come cheap. But an innovative piece of technology could change that, and the Los Alamos County Airport recently played a role in putting this new technology to the test.

Officials from New Mexico Department of Transportation aviation division as well as employees with Silent Falcon, a company based in Albuquerque, came to the local airport Nov. 8 to test out Silent Falcon’s drone. This drone could play a pivotal role in changing the way airport pavement is inspected.

Los Alamos County Airport Manager Cameron Humphres desribed the unmanned aircraft with its 6-foot wingspan made of carbon fiber, solar panels attached to the wings and a camera and sensors attached to the plane, which has a battery pack that allows it to fly four to five hours.

Humphres explained that the plane is launched into the air via catapult and it is returned to the ground by parachute. Its flight plan is pre-programmed and when the plane was tested in Los Alamos it only took 35 minutes to get all the needed imaging captured.

Humphres said the plane can be used to take aerial photos for mapping purposes and pavement inspections, adding that its camera can provide measurements, in fine detail, and run data algorithms to identify cracks and degradation in payment.

Right now, the focus is just on proving the concept behind the drone but Humphres said the benefits could be huge. In fact, he said the drone could cut the cost of pavement inspections by a quarter or more.

The cost for an inspection is expensive, Humphres said. As an example, the runway at the Los Alamos County Airport is 6,000 feet long and 120 feet wide. A pavement inspection at the airport would cost $20,000 or more. He explained that every dollar spent on inspecting the pavement is less money that can be used on actual pavement maintenance.

“Pavement on an airport is very important,” Humphres said. “It’s very expensive to repair that infrastructure so we want to take care of it.”

He pointed out that airplanes are moving on and off runways and taxiways at high speeds, so the pavement needs to be in good condition. Plus, if airports receive funds from the Federal Aviation Administration, they are required to inspect the pavement.

Inspections are done manually with a person walking every square foot, taking photographs, measuring cracks and writing a report, he said. Silent Falcon, which created a fleet of drones, is proposing a different way. Not only would the drone be cheaper, but the airport would be provided high resolution images of its pavement, Humphres said.

There were several reasons why Los Alamos was chosen as the test site for the done, Humphres said.

“The primary reason is the challenging conditions,” he said.

These conditions include the wind as well as the restrictive airspace due to the Los Alamos National Laboratory. Plus, there are residences to the west and the airport sits on 89 acres, so Humphres said it is a tight envelope in which to operate aircraft.

He said another reason the local airport was chosen was “because … within the last 10 years we did a runway extension and about three years ago we did a full runway rehab (which included resealing and crack seal). We know what has happened in the runway; there has been a lot of repair and maintenance and Silent Falcon tested to see those differences.”

The results of the test are still being reviewed but Humphres said he hopes to get the results in the first quarter of 2020.

“In general, I think this has potential to benefit our airport … but more broadly it could benefit all New Mexico airports,” he said, adding that he enjoyed being a part of this innovative technology.

“I’m just really thrilled to help – it benefits everyone in aviation but really it was just fun,” Humphres said. 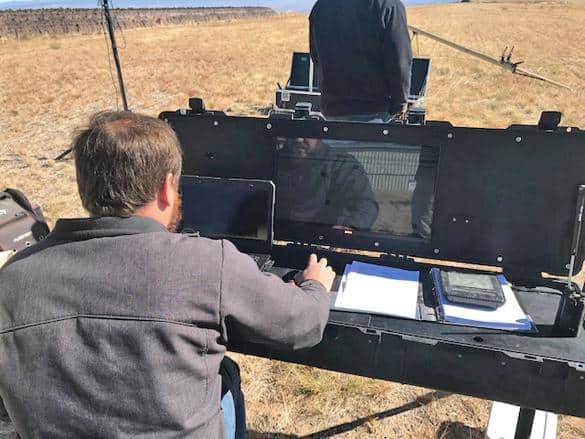 The drone was controlled by a computer. Courtesy photo