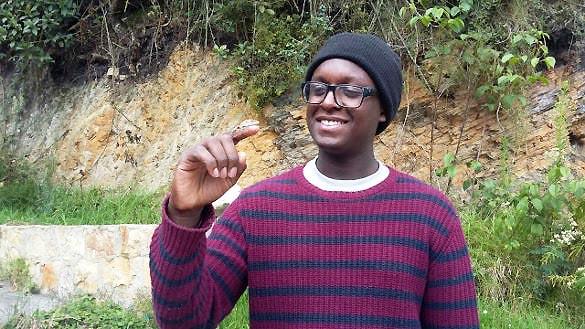 A diminutive little tree lizard soaks up the sun in the Caribbean. Photo by J. Salazar
VIRGINIA TECH News:
If you’ve ever spent time in the Caribbean, you might have noticed that humans are not the only organisms soaking up the sun.
Anoles – diminutive little tree lizards – spend much of their day shuttling in and out of shade. But, according to a new study in Evolution led by Assistant Professor Martha Muñoz at Virginia Tech and Jhan Salazar at Universidad Icesi, this behavioral “thermoregulation” isn’t just affecting their body temperature.
Surprisingly, it’s also slowing their evolution.
The idea that evolution can be slow on islands is actually somewhat strange. Ever since Darwin’s journey to the Galapagos, islands have been recognized as hotspots of rapid evolution, resulting in many ecologically diverse species. The reason why evolution often goes into overdrive on islands has to do with the ecological opportunity presented by simplified environments. When organisms wash up on remote islands, they find themselves freed of their usual competitors and predators, which frees them to rapidly diversify to fill new niches. This phenomenon of faster evolution is often referred to as the “island effect.”
Yet, the researchers discovered that physiological evolution in Anolis lizards is actually much slower on islands than on the mainland. What is causing evolution to stall?
The same ecological opportunity that frees island organisms from predators also facilitates behavioral thermoregulation. “Whereas mainland lizards spend most of their time hiding from predators, island lizards move around more, and are able to spend much of their day precisely shuttling between sun and shade,” said Muñoz, of the Department of Biological Sciences in the College of Science.
If it gets too hot, island lizards simply go find a shady spot. If it gets too cold, they can dash onto a sunny perch. By thermoregulating, island lizards are not just buffering themselves from thermal variation. They are effectively shielding themselves from natural selection. If lizards aren’t exposed to extreme temperatures, then selection on physiology is weakened. The result? Slower rates of physiological evolution. Effectively, island lizards use behavioral thermoregulation like SPF against natural selection.
“Our results show that faster evolution on islands is not a general rule,” Jhan Salazar said.
This slower physiological evolution on islands stands in stark contrast to morphology, which has been shown to evolve faster in island anoles. When it comes to morphology and physiology on islands, it seems we are looking at different sides of the same coin. The same ecological release from predators and competition that allowed for the truly impressive amount of morphological diversification that has appeared quickly among island anoles, seems to additionally allow for more behavioral thermoregulation which slows physiological evolution.
“We are discovering that organisms are the architects of their own selective environments, meaning that behavior and evolution are locked together in a delicate dance. This pas de deux tells us something important about how diversity arises in nature,” said Muñoz, who is an affiliated faculty member of the Global Change Center, housed within the Fralin Life Sciences Institute.
Menu
Los Alamos
55°
Fair
5:50am8:25pm MDT
Feels like: 55°F
Wind: 0mph WNW
Humidity: 54%
Pressure: 30.19"Hg
UV index: 0
SatSunMon
75/54°F
68/55°F
66/55°F
Weather forecast Los Alamos, New Mexico ▸