Gov. Susana Martinez lauded members of the tourism industry for the role they have played in delivering a second straight year of record-breaking tourism growth by putting their support and money behind community-specific “New Mexico True” messages.

“It is gratifying to see so many New Mexico communities working together to create a unified message about our wonderful state,” Martinez said. “The New Mexico True campaign has proven to be a powerful and successful tool in increasing tourism revenue, thanks in a large part to those of you who have come on board and brought to life the unique adventures and culture of your area.” 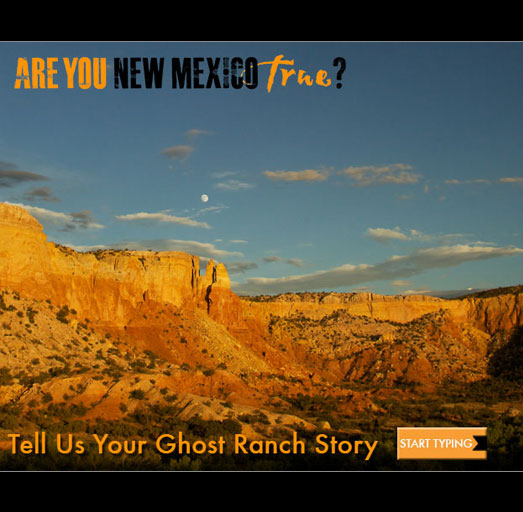 “We wanted to make it easy for communities to be part of something bigger,” Tourism Cabinet Secretary Monique Jacobson said. “We know it is important to have a unified voice in the marketplace, so we looked for ways to help communities come onboard with the New Mexico True campaign. In doing so, we have both improved the quality of the ads reaching travelers and helped our cities and counties extend the impact of their advertising budgets.”

Click here for a link to before/after of ads http://nmtourism.org/nm-true-brand/true-adopters.

“This has been a campaign that is a perfect fit for every community. We feel by giving the state a unified identity it has helped the potential traveler envision what adventures steeped in culture await their soul,” said Lisa Boeke, Director of Marketing, Communications and Tourism at the Carlsbad Chamber of Commerce. “Carlsbad is proud to be New Mexico True.”

To date, over 25 communities have reported that they will be spending their own dollars (lodger’s tax, chamber monies, etc.) applying the New Mexico True brand to their marketing efforts. The total dollar value of these contributions is an estimated $2 million.

“Since becoming a New Mexico True community in August we’ve seen double digit increases in lodgers tax revenue,” says Mayor Linda Calhoun of Red River. “We made the decision to showcase what makes Red River special while piggybacking on groundwork made by New Mexico True. It’s a smart way to make our advertising dollars work harder and be part of something bigger.”

In addition to the projected 10 percent increase in lodgers tax revenue in Red River, additional New Mexico True communities are also seeing significant gains. In March the City of Alamogordo reported an increase in visitation of 15.3 percent over last summer, and visits at White Sands National Monument have jumped 9.5 percent over 2013. The Town of Taos has also reported double-digit increases every month this year through April, and Roswell has seen a 10 percent gain in lodgers tax revenue through May.