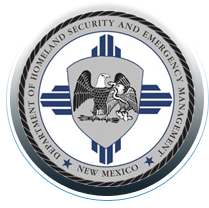 Below is a summary of each incident:

Power Outage – City of Albuquerque
Incident: Multiple power outages around the city since approximately 9:30 p.m. June 10. Affected Population: Initially 1,900. Power was restored to all areas by 5 a.m./June 12. Affected Area: Selected areas of the population base of the City of Albuquerque. Situation Overview: CABQ EOC partially activated at approximately 9:05 a.m. Tuesday morning at level 3. At approximately 9:30 p.m. June 10, a dry micro burst wind event knocked down power distribution lines disrupting operations at the Embuto Switching Station in the NE heights. The City of Albuquerque opened several cooling centers in light of the combination of Monday night’s power outage and the excessive heat the city is experiencing. CEOC has returned to steady state/normal operations, and cooling centers have been closed.

Jaroso Wild Fire – Santa Fe County
Location: approximately 6 miles southeast of Borrego Mesa
Date of Origin: Monday June 10 at approximately 1:45 p.m.
Size: Approx. 8,000 acres. The fire is being observed by air and the heavy smoke has made it difficult to determine the true size of the fire. Containment 0 percent
Cause: Lightning
Total Personnel: 350
Situation Overview: The fire is burning in mixed conifer, heavy dead and downed fuels with pockets of bug-killed trees. It is burning in an area of downed timber caused by a wind event six years ago.
The fire is burning deep in the Pecos Wilderness. No communities are threatened. The smoke column is reaching close to 20,000 feet, forming 3 distinctive heads and taking more shape. The fire is active in the blowdown area and has burned into Pecos Baldy. Available air resources are being used in an attempt to slow the fire’s progress. Firefighter safety remains a priority. Smoke will likely be significant today and transported over the Sangre de Cristo Mountains toward Mora, Holman and northeastern New Mexico.
Air attack resources will continue to assess and monitor fire progression and behavior today. Ground resources are not currently being used due to safety concerns regarding volatile fire behavior and concern for adequate safety zones and escape routes in the remote wilderness area. A Type 1 team, Tony Sciacca Incident Commander, has been ordered and will arrive today to brief with forest fire officials and begin overseeing fire management at 6 a.m. Thursday morning.
Weather Forecast
Today: Mostly sunny, with a high near 73. North wind 5 to 15 mph becoming south in the afternoon.
Tonight: A 10 percent chance of showers and thunderstorms. Some of the storms could produce gusty winds. Mostly cloudy, with a low around 54. West wind 5 to 15 mph becoming northeast after midnight.
Tomorrow: Temperatures will continue to be high at 77-82 degrees with winds out of the southwest at 10-15 mph.

Silver Wild Fire – Grant/Sierra Counties
Location: 7 miles Southwest of Kingston
Date of Origin: Friday June 7, 2013 approx. 3 p.m.
Size: 11,500 acres
Percent Contained: 0
Cause: Lightning
Total Personnel: 350
Resources assigned: 2 heavy helicopters, 2 medium helicopters and 1 light helicopter, seven hotshot crews, three 20-person crews, 10 engines, and two dozers
Situation Overview: Reidy Northern Arizona Type II Incident Management Team assumed control of the fire Monday evening. Unusual nighttime easterly winds yesterday drove the Silver Fire to within one-quarter mile of the town of Kingston. Firefighters responded overnight and successfully protected the town. Kingston remains under a mandatory evacuation order. An evacuation center is located in the town of Hillsboro at the Community Center on Elenora Street.
A public meeting was held at 10:00 this morning at the Hillsboro Community Center.
To ensure public safety, the Aldo Leopold Wilderness Area has been closed east of Highway 150 from the Continental Divide Trail #74 south to Reeds Peak. Highway 152 from San Lorenzo to Hillsborough is closed to eastbound and westbound traffic from 35 miles east of Bayard at mile marker 16 to 10 miles west of Hillsboro at mile marker 40. Trail #79 is also closed. For more information see http://fs.usda.gov/gila or www.nmroads.com.
Northern Arizona Incident Management Team is assessing the most effective areas to engage the fire with the greatest probability of success. This fire is especially dangerous as it has been over 100 years since there has been a fire in this area and the forest is extremely dense.
Crews are beginning to build fireline where possible and specialized crews are completing structure protection.
Weather Forecast:
Today’s weather will continue to challenge firefighter efforts to contain and suppress the Silver Fire. It will be hot and dry with the possibility of dry lightning.
Smoke Notice:
Unstable atmospheric conditions could allow for a large column of smoke to form over the fire.

Thompson Ridge Wildfire – Sandoval County
Location: 10 mi. N of Jemez Springs, NM on Hwy 4
Date of Origin: Friday May 31, 2013 approx. 2 p.m.
Size: 22,852 acres
Percent Contained: 50 percent
Cause: Human
Total Personnel: 991
Situation Overview: Managed by Arizona Central West Zone Type 2 Incident Management Team. Demobilization of resources is expected to begin on 6/13/13 and continue over several operational periods.
Last night crews experienced minimal fire behavior. The majority of activity involved patrolling on the northeast edge of the fire and continued mop up operations south towards the Headquarters District. Crews continued mop up on the flanks of the spot fire on South Mountain checking for hot spots within the perimeter.
Today, firefighters will continue to patrol the perimeter and seek out hot spots within the interior. New hotspots may have appeared overnight as the larger column collapsed and could potentially drop embers on previously cleared areas.
All points of entry to the Valles Caldera National Preserve are closed to public access due to fire activity. The Fenton Lake State Park is also closed to the public.
Weather Forecast
Today: Mostly sunny, with a high near 87. North wind 5 to 15 mph becoming southwest in the afternoon.
Tonight: A 10 percent chance of showers and thunderstorms. Some of the storms could produce gusty winds. Partly cloudy, with a low around 52. West wind 5 to 15 mph becoming northwest in the evening.

Tres Lagunas Wildfire – San Miguel County
Location: 10 miles North of Pecos, NM
Date of Origin: Thursday May 30, 2013 approx. 3 p.m.
Size: 10,237 acres
Percent Contained: 77 percent
Cause: Human
Total Personnel: 660
Resources Assigned: 18 Hand Crews, 5 Helicopters, 26 engines, 5 bulldozers, 6 water tenders.
Situation Overview: Managed by the New Mexico Type 2 Incident Management Team.
Mop up, backhauling of equipment, and rehabilitation of firelines will continue on all sides of the fire except for the east side. Mop up includes extinguishing or removing burning material near containment lines, felling snags, and trenching logs to prevent rolling after an area has burned. On the east side of the fire where it burned into the old Viveash fire scar, crews continue to look for opportunities to construct handline and dozer lines. Resources and equipment are gradually being demobilized.

Highway 63 is now open. Private landowners who live north of Windy Bridge are now able to access their private property. The public is reminded that the Pecos/Las Vegas Ranger District is closed to public entry due to extreme fire danger including the entire Pecos Wilderness. The District closure pertains to all recreational uses (fishing, camping, hiking, etc.) including recreation resident leasees or permittees on national forest land. For questions about the District closure, please call the Pecos Ranger District at 505-757-6121.
NM Game and Fish lands in the Pecos Canyon are also closed to all recreational use.
Due to heavy fire traffic, residents returning to their homes should avoid driving on Highway 63 before 8 a.m. and after 5 p.m.
Electricity has been restored to all evacuated areas except for Holy Ghost Canyon. Century Link continues to repair phone lines in the area.

Weather Forecast
Today: Hot and dry conditions continue today with temperatures remaining well above normal. Winds will be lighter out of the Southwest at 10-12 mph with gusts up to 24 mph, and a slight chance of dry thunderstorms is possible.
Tonight: A 10 percent chance of showers and thunderstorms. Some storms could produce gusty winds. Mostly cloudy, with a low around 54. West wind 5 to 15 mph becoming northeast after midnight.
Smoke Notice: Residents in Pecos Canyon and areas east of the Tres Lagunas fire may be impacted by smoke coming from the Jaroso Fire in the Pecos Wilderness.