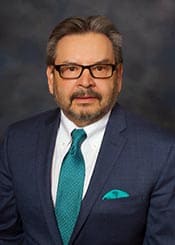 “I am deeply saddened to hear about the passing of Sen. Carlos Cisneros. He was a dedicated public servant, serving his community since 1985. His hard work in the Senate was exemplified through his commitment to the capital outlay process, which he always led with integrity.

Just last week I had the pleasure of being with Senator Cisneros in Taos for a community meeting, where he was open and receptive to the concerns of his constituents and eager to keep moving New Mexico forward.

Tonight, I want to send my sincere condolences to his entire family, the New Mexico Senate, and the legislature as a whole – we lost a great statesman.”

Sen. Cisneros was a Democrat who represented District 6, which includes Los Alamos, Rio Arriba, Santa Fe and Taos counties. He worked in the insurance industry and served in the senate for 34 years.

The cause of the death of Sen. Cisneros has not been released. Services are pending.

“I am completely shocked and deeply saddened to learn of the unexpected death of Carlos Cisneros. The senator faithfully served Northern New Mexico and our state for more than three decades. His leadership and friendship will be sorely missed.
“The Senate was made a better place by his wealth of institutional knowledge. A senior member of the body and an important committee chairman, he played an instrumental role in delivering infrastructure projects all across the state for many decades. The senator strove for impartiality and fairness, and he was as good a listener as he was a talker. When I took office, Senator Cisneros stepped up and offered to draft our first priority bill, a piece of legislation that ultimately doubled the state’s investment in small businesses. He was a solid partner.
“He began his professional career as a mine worker and became a union leader; he was a student of New Mexico all his life. I extend my deepest condolences to his family, his friends and colleagues in the Senate, and all who loved him.”
House Dist. 43 Rep. Christine Chandler issued the following statement:
“I am deeply saddened by the sudden loss of our colleague Senator Carlos Cisneros. He and I attended the Land Grant Interim Committee together on Monday. As usual he was thoroughly engaged, offering thoughtful insights and suggestions.
“Senator Cisneros represented his constituents with commitment, compassion and energy.  He was a champion for all of us – always there for White Rock, Los Alamos and the Laboratory.
“His passing is a great loss. He will be missed. My heart goes out to his wife and family.”

“The New Mexico Senate Democratic Caucus is deeply saddened to report the sudden passing of Senator Carlos Cisneros. Serving New Mexico since 1985, Senator Cisneros was the most senior democratic member of the senate and served as Chair of the Revenue Stabilization & Tax Policy Committee, and Vice Chair of the Senate Finance Committee.”

“This is a tremendous shock for the caucus. The loss of Senator Cisneros will leave a hole in the senate that will not be easily filled. He was an invaluable member who had a tremendous grasp of New Mexico’s finances, and his institutional knowledge will be difficult to replace. My heart goes out to his family and the constituents he served.” – Senate President Pro Tem Mary Kay Papen

“The entire New Mexico Senate mourns the death of Senator Carlos Cisneros. He was a champion for northern New Mexico who loved serving our state. He will be greatly missed.” – Senate Majority Leader Peter Wirth

“The entire Senate Republican Caucus is in mourning over the sudden passing of Senator Carlos Cisneros today. We grieve the loss for his family and friends, his Senate district in Northern New Mexico and we grieve for the entire state.

“Senator Cisneros was a dedicated public servant whose sincere desire was to improve the condition of the state so all New Mexicans could flourish and thrive. While his voice is silenced now, we will remember all he accomplished. Our state is much better off because when Senator Cisneros spoke on the Senate floor and as he chaired his powerful interim Revenue, Stabilization and Tax Policy  committee, he commanded a great deal of respect because of this sincere and thoughtful perspectives.

“Thank you dear colleague for caring so much about the people of New Mexico.  We are all hurting and sad that we have lost you too soon. You were a true gentleman, statesman and a real good guy.”

“Jill and I are saddened by the sudden passing of Sen. Carlos Cisneros. For over three decades, he was dedicated in his service to the people of Northern New Mexico and the entire state. We are keeping the Cisneros family in our hearts.”

“I am deeply saddened by Senator Cisneros’ passing. He was passionate about his community and committed to working hard on their behalf. Whether focused on serving veterans or preserving our connection to public lands, he was a true champion for the people of Northern New Mexico.”

“I am incredibly saddened to hear of the passing of Senator Carlos Cisneros, who was a champion of New Mexican families, particularly for our rural communities. My thoughts are with his family and friends at this time.”

“New Mexico and Northern New Mexico have lost a champion. Carlos Cisneros has been my family’s State Senator since we moved to Los Alamos over a decade ago.

“He will be sorely missed at the Roundhouse for his commitment to helping our families, his expertise on the budgeting process, and for helping to mentor new legislators

“Eric and I send our thoughts and condolences to his family at this difficult time.”

“Today we mourn the passing of Senator, Carlos Cisneros. Senator Cisneros dedicated his life to advocating for Northern New Mexico communities, which include the eight northern pueblos (Nambé, Ohkay Owingeh, Picuris, Pojoaque, San Ildefonso, Santa Clara, Taos, and Tesuque) in the New Mexico Senate. The Senator touched the lives of thousands of New Mexicans over the course of his 34-year career. He will leave behind a legacy of commitment and service to the people of New Mexico. We offer our deepest condolences to his family, friends and to the people of New Mexico.”

“It is with a heavy heart that I offer my sincere condolences to the family and friends of Denator Carlos Cisneros. I am thankful for having had the opportunity to work with him during his time in the New Mexico Legislature and grateful for the service that he provided to the tribal communities of Northern New Mexico.”

“Thank you, Senator Cisneros, you were a good example of a public servant, a good friend to Taos Pueblo.”