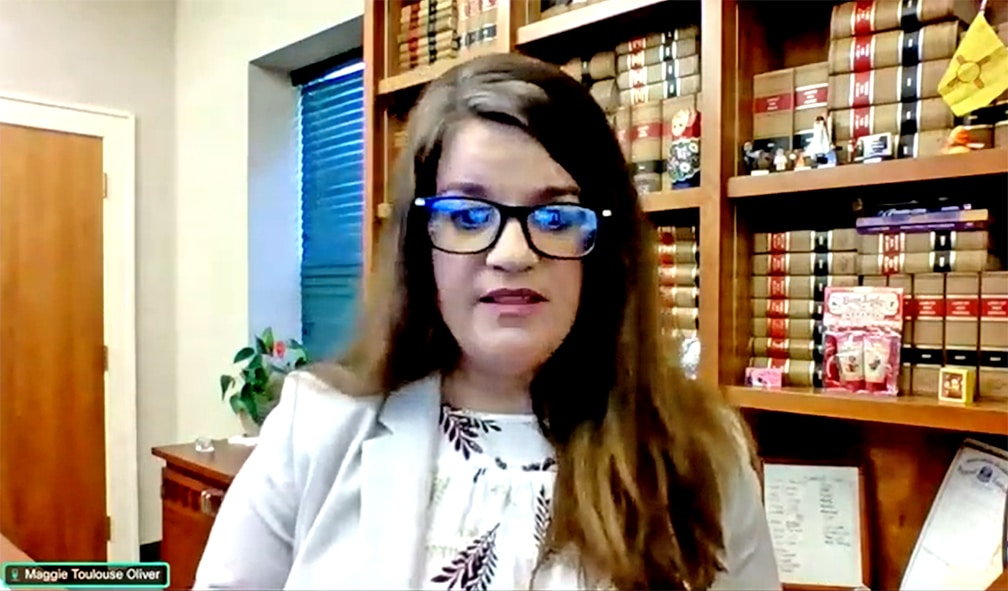 Secretary of State Maggie Toulouse Oliver testifying today in front of the U.S. House Committee on Homeland Security during its hearing on ‘The Changing Election Security Landscape: Threats to Election Officials and Infrastructure’. Post Screenshot

From the Office of the Secretary of State:

SANTA FE – Secretary of State Maggie Toulouse Oliver today testified in front of the U.S. House Committee on Homeland Security during its hearing on “The Changing Election Security Landscape: Threats to Election Officials and Infrastructure.”

A full recording of today’s hearing can be found on the Committee’s YouTube channel.

Secretary Toulouse Oliver’s full written testimony can be found below and also may be accessed on the Secretary of State’s website.

Statement Before the U.S. House of Representatives

Members of the Committee,

Thank you for organizing this important hearing today and for inviting me to testify. My name is Maggie Toulouse Oliver and I serve as New Mexico’s Secretary of State, our state’s chief elections officer.

Election administration in the United States is conducted at the state, county, and local levels by civil servants who come to work every day to do their duty keeping the engine of our democracy running. This work is not glamorous, but it is vital to how we elect our leaders and how we organize our way of life.

Since 2020, however, lies and misinformation about how elections are run and about the people who run them have proliferated to an unprecedented degree. Among a significant portion of the country the continuous drumbeat of these lies has created an atmosphere of distrust in our elections and our election officials.

Of course, these things are not true and no one has ever produced a shred of evidence to support these conspiratorial claims. But the consequences of these lies have real world impacts, especially for election officials.

For people who believe their government is corrupt and their leaders are not legitimate, threats of physical violence and acts of intimidation have, unfortunately, begun to seem like acceptable responses.

In New Mexico, the conspiracies about our voting and election systems have gripped a certain portion of the electorate and have caused people to take action. During the 2020 election cycle, I was doxxed and had to leave my home for weeks under state police protection. My office has since had to utilize services for both me and members of my staff that prevent doxxing by removing personal identifying information from the internet.

Since 2020 my office has certainly seen an uptick in social media trolling, aggrieved emails and calls into our office, and other communications that parrot the misinformation circulating widely in the national discourse.

But more recently, especially since our June 2022 Primary Election, my office has experienced pointed threats serious enough to be referred to law enforcement. As recently as June, for example, there were three threatening phone calls against me that were referred to our FBI field office for investigation.

These threats came on the heels of my office’s effort to directly combat election misinformation through a new website, and shortly after a nationally publicized situation in Otero County, New Mexico where the county commission – parroting much of the election misinformation we’re seeing across the country – initially refused to certify the Primary Election results. My office then had to seek a court order to compel them to perform their duty under the law.

Growing distrust about our election systems leads to either apathy or indignation, both of which will have detrimental effects on our entire system of government. For the election officials and volunteer poll workers that our elections depend on, I fear that threats, coupled with the general vitriol online and in the media directed at all aspects of our elections, will cause them so much stress and uncertainty that they will simply not want to do the work anymore. We have already seen this happening in many parts of the country. For voters, I fear that the flood of misinformation will compel them to lose more and more trust in the system and they will no longer participate in our democracy.

I believe both federal and state law enforcement agencies are taking these threats seriously and are diligently investigating them. We must show the public that threats against election officials will not be tolerated.

However, legal action is the last line of defense. We will not put a stop to such threats until the rhetoric gets ratcheted down and elected officials, the media, political parties, and others find better ways to educate the public about the realities of how our elections are conducted and secured.

I hope my testimony today is helpful for the Committee and your future work. I thank you again for giving me this opportunity to testify on these crucial matters on behalf of New Mexico and our state’s election administrators.

I look forward to answering any questions you may have for me.