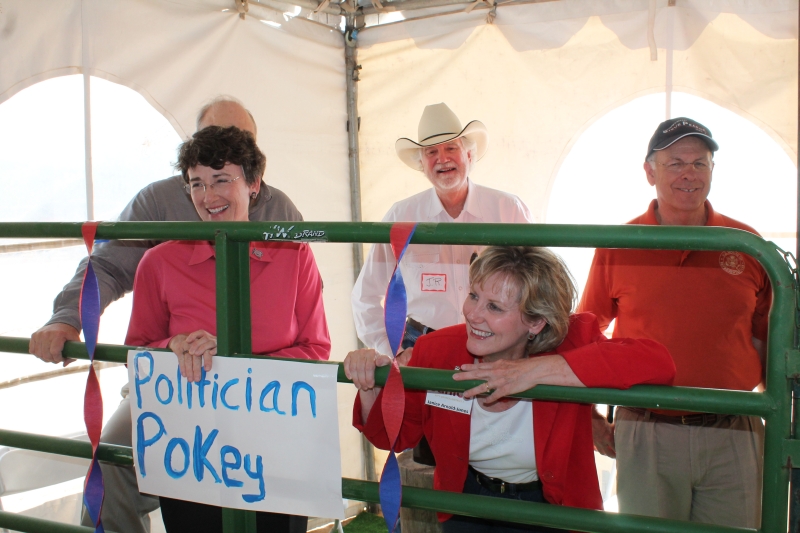 Saturday at a Santa Fe Federated Republican Women’s picnic, some prominent politicians were “arrested” on trumped up charges and thrown into a Jail called the “Politician Pokey.”

While it was all in fundraising fun, those confined in the small corral on the San Ildelfonso Pueblo, pleaded desperately for someone to bail them out.

U.S. Rep. Steve Pierce, arrested for “Flying his plane too high, encroaching on Inter-Galactic Air Space,” resorted to a typical political ploy, shouting, “Let me out! I didn’t do it! My wife did it!” This didn’t get too far with SFFRW President Frances Fernandes, or Treasurer Elaine Hausman, because they knew his wife couldn’t fly a plane.

Heather Wilson’s plea (who was charged with abandoning the People’s Republic of New Mexico and spiriting her family off to the Badlands of South Dakota) that she had to go where the job was, initially fell on deaf ears. Then the decision was made to pay her bail, and she was freed by arresting “officers” – former San lldelfonso Gov. Elmer Torres and his assistant, Red Turtle Dancer David Trujillo. Wilson then accepted the Lady of Liberty Award for her outstanding service to New Mexico.

Jailed and perspiring with the others were Dr. JR Damon and Albuquerque City Counselor Janet Arnold-Jones who was charged with being “too intelligent.”

Finally, some of those confined paid their own bail, saying it was for a good cause. Others got bailed out by friends and members of SFFRW.

In the end everyone was free to enjoy the spellbinding performance of the Native American Red Turtle Dancers of Pojoaque, and the impressive hoop dancing of 12-year-old Qootsvenma (Taka) Denipah, and his drummer/singer sister Talavai Denapa.