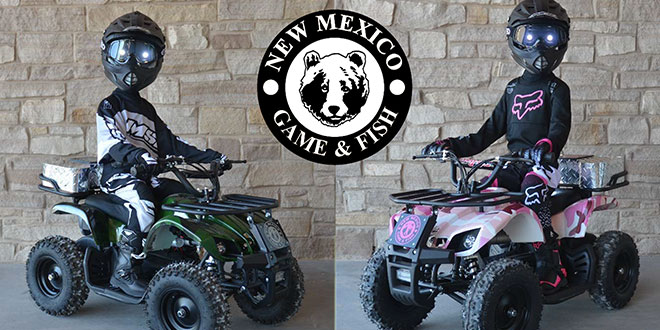 For the first decade of the New Mexico Department of Game & Fish Off-highway Vehicle (OHV) Program’s operations, the main method of public outreach has been its All-terrain Vehicle (ATV) simulator.

The simulator works for small groups as a one-on-one introduction to ATV safety. However, trying to reach larger audiences with the simulator requires a lot of labor and time.

The OHV Program has two new tools for large group public outreach: the ATV-riding robots Safety Sam and Safety Sara. The robots are the inspiration of Ashley Bruggenschmidt, an Indiana elementary school principal and mother of an 11-year-old girl who was tragically killed in an ATV rollover accident.

In loving memory of her athletic daughter Kate, and to foster a positive outcome from her family’s loss, Principal Bruggenschmidt created a foundation called Play For Kate (website: www.playforkate.com), which sponsors softball tournaments and other events.

She sought a way for the foundation to deliver the message of ATV safety to school-aged children, and after researching the idea of a mascot, she found a local company producing robots for law enforcement and military applications. Together they designed and built the first Safety Sam, an animatronic child-sized robot riding a remote-controlled electric ATV.

It’s important to note that while the robot is used to focus on ATV safety, particularly on the physical skills required for safe operation, we also discuss the laws and rules that apply to all OHVs and to kids riding all types of OHVs. Unlike other recreational vehicles such as side-by-sides and dirt bikes, ATVs are a specific type of OHV with straddle seating, handlebars for steering and three or more wheels.

Several versions of Safety Sam now travel with conservation officers of Indiana’s Department of Natural Resources, conducting ATV safety presentations to the state’s schools and other audiences. New Mexico’s OHV Program, upon learning about Safety Sam, arranged to purchase the first version operating outside of Indiana. Sam was so well-received in New Mexico that the OHV Program subsequently ordered a female version, Safety Sara, which has a long ponytail streaming from the robot’s helmet and rides a pink camo ATV.

Safety Sam has visited schools in Los Lunas, Bosque Farms, Gallup and Socorro so far, reaching more than 700 elementary students. Sam makes a grand entrance at schools, wearing full safety gear including helmet, goggles, boots and gloves, with LED eyes glowing and ATV-mounted strobe lights flashing. Some younger children find the robot a little creepy, but older kids – many already learning about robotics in their science classes – are excited to watch Sam as he leans and looks through his turns just the way a human should.

Safety Sam and his human presenter introduce themselves and ask the kids how many of their families have OHV(s). In the more rural schools, a majority of the kids raise their hands. They represent an important segment of New Mexico’s OHV-using population and nationwide, a group likely to have ATV accidents, injuries or fatalities – kids we need to reach.

It’s important to note that while the robot is used to focus on ATV safety, particularly on the physical skills required for safe operation, we also discuss the laws and rules that apply to all OHVs and to kids riding all types of OHVs. Unlike other vehicles such as side-by-sides and dirt bikes, ATVs are a specific type of OHV with straddle seating, handlebars for steering and three or more wheels.

A popular feature of Safety Sam school presentations is a safety gear race, where volunteer teachers and school staff participate in putting on helmets, goggles, boots and gloves while their classes cheer them on. The participants receive souvenir OHV program coffee mugs for being willing racers.

Presentations also include a short video montage produced by the Department’s Information and Education staff, showing a group of kids going through an ATV safety class at the Los Lunas OHV Education Training Center. The audience sees how much fun a hands-on safety class can be, especially when the students get to ride the intermediate skills trail the Village of Los Lunas Open Space Division has constructed with OHV Trail Safety Fund grant money.

The video concludes with a message from OHV Law Enforcement Coordinator Desi Ortiz, reminding the audience about the laws and rules applying to OHV recreation in New Mexico.

Safety Sara has not yet traveled to any schools, and with the coronavirus shutdown, event scheduling has been suspended. When schools resume normal classes, both robots will hit the road in custom-wrapped trailers to spread the message of ATV safety, and hopefully preventing accidents and fatalities.

The Safety Sara and Safety Sam public outreach program, like all activities of the Department’s OHV Program, is entirely funded by revenue from OHV registrations, collected in the Trail Safety Fund.