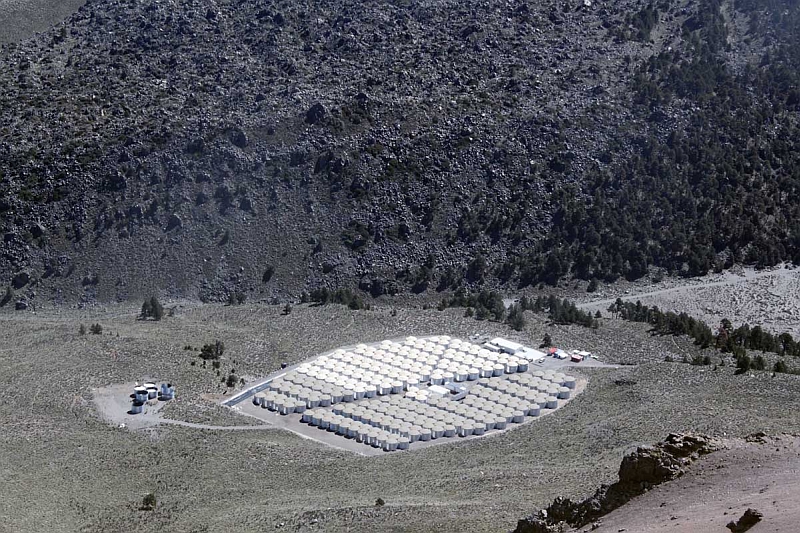 The HAWC Observatory taken in August 2013 from the summit of Sierra Negra. The image has been digitally altered to show HAWC as it will appear when construction is complete in 2014. The 111 Cherenkov detectors currently installed (100 Cherenkov detectors in operation) are colored white and located in the upper right quadrant of the array. Courtesy/LANL

The High-Altitude Water Cherenkov (HAWC) Gamma Ray Observatory has begun formal operations at its site in Mexico. HAWC is designed to study the origin of very high-energy cosmic rays and observe the most energetic objects in the known universe. 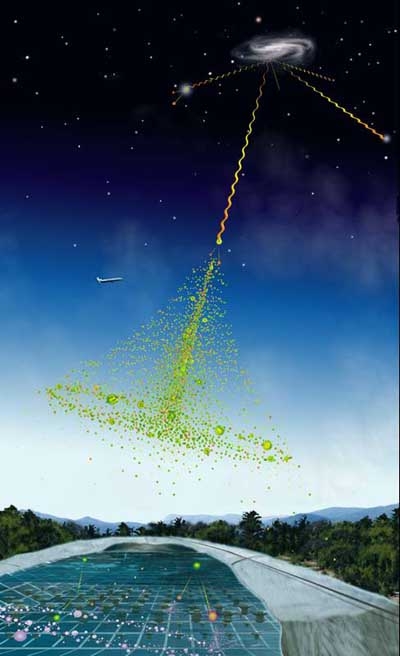 Artist’s conception of a black hole in the center of a distant galaxy emitting gamma rays, one of which reaches the Earth. Upon entering the terrestrial atmosphere, the gamma ray will produce a cascade of energetic particles that travels to detectors on the ground. Courtesy/Aurore Simonnet, Sonoma State University

This extraordinary observatory, using a unique detection technique that differs from the classical astronomical design of mirrors, lenses, and antennae, is a significant boost to international scientific and technical knowledge.

“The HAWC observatory will search for signals from dark matter and to study some of the most extreme objects in the universe, such as supermassive black holes and exploding stars,” said Brenda Dingus, principal investigator and a research fellow at Los Alamos National Laboratory. Dingus is a Fellow of the American Physical Society, and in 2000 was a recipient of the Presidential Early Career Award for Scientists and Engineers.

HAWC is located at an altitude of 4,100 meters on the slope of the volcanoes Sierra Negra and Pico de Orizaba at the border between the states of Puebla and Veracruz. The observatory, which is still under construction, uses an array of Cherenkov detectors to observe high-energy cosmic rays and gamma rays. Currently 100 out of 300 Cherenkov detectors are deployed and taking data. Each Cherenkov detector consists of 180,000 liters of extra-pure water stored inside an enormous tank (5 meters high and 7.3 meters in diameter) with four highly sensitive light sensors fixed to the bottom of the tank.

“Los Alamos has a long history of working in this field and built the predecessor to the HAWC observatory, called Milagro, located at the Los Alamos site in New Mexico,” Dingus said.

“HAWC will be more than 15 times more sensitive than Milagro was, and it will detect many new sources of high-energy photons. Los Alamos also studies these high-energy phenomena through complex computer simulations to understand the physical mechanisms that accelerate particles to energies millions of times greater than man-made accelerators,” Dingus said.

The construction and operation of HAWC has been made possible by the financial support of several Mexican institutions such as the Consejo Nacional de Ciencia y Tecnología (CONACYT), the Universidad Nacional Autónoma de México (UNAM), and the Instituto Nacional de Astrofísica, Óptica y Electrónica (INAOE). Funding has also been provided by the United States through the National Science Foundation (NSF), the Department of Energy (DOE) Office of Science, the Los Alamos National Laboratory (LANL), and the University of Maryland. The University of Maryland is the managing institute of the project overall.

The HAWC array, operating with 100 Cherenkov detectors since August 1 and growing each week, will be sensitive to high-energy particles and radiation between 100 GeV and 100 TeV, energy equivalent to a billion times the energy of visible light. For more information online see http://www.hawc-observatory.org/.

In 2009, HAWC was identified as the Mexican astronomical project with the highest expected impact on high-energy astrophysics. Shortly thereafter a test array with three Cherenkov detectors was installed at the volcano Sierra Negra and successfully observed cosmic rays and gamma rays. Following these early tests, a prototype array of seven Cherenkov detectors was built in 2009 to test the tank design, simulate real data-taking, and study the logistics of deploying a large-scale observatory in this remote location. In 2012, the first 30 of 300 HAWC detectors were deployed, and since that time have been operated nearly continuously. The 30-detector stage of HAWC permitted calibration of the observatory via the observation of the shadow of the moon as it blocked cosmic rays. (http://1.usa.gov/14jjT8w)

Today, the scientific team of HAWC will formally begin observations of the most violent phenomena in the known universe, such as supernovae explosions and the evolution of supermassive black holes. 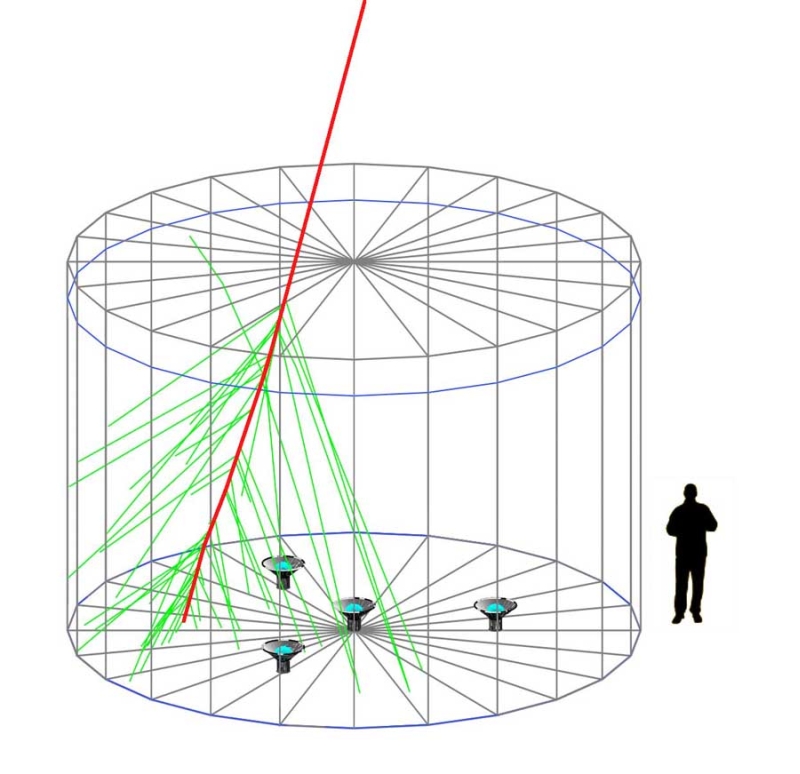 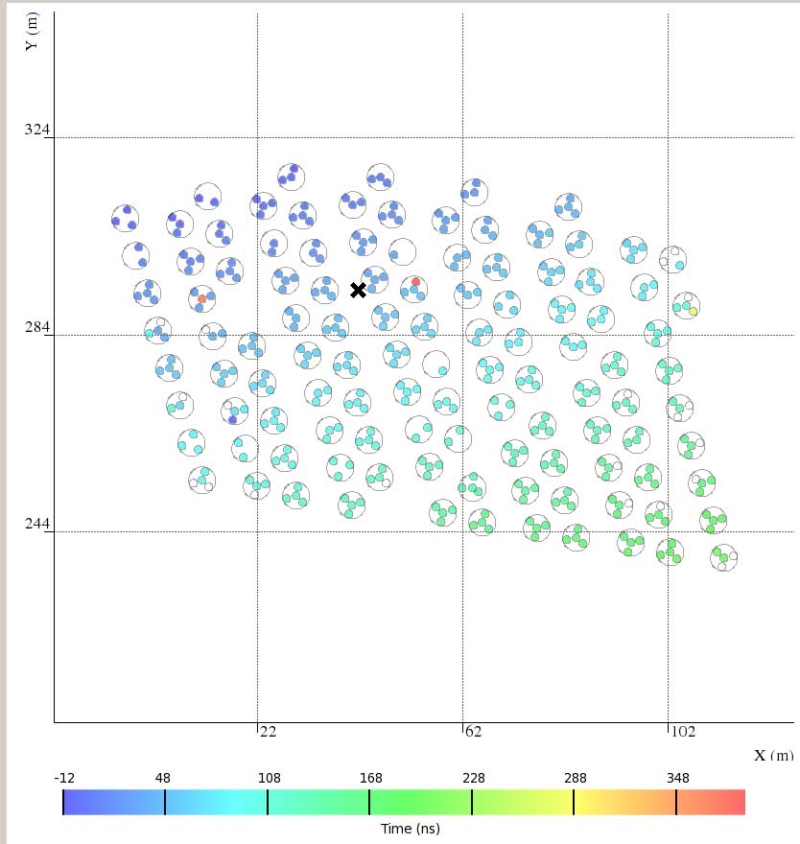 Image of an event produced by particle cascade in the HAWC observatory. The larger circles represent each Cherenkov detector in HAWC, each contains 4 photo-sensors represented in the figure as smaller circles. The color of each small circle or photo-sensor represents the arrival time of the particle cascade to each sensor. This is one of the first images recorded by HAWC since the beginning of operations. In particular, this cascade arrived from the upper left to the bottom right and its center hit HAWC at the “X” mark. The time scale is given in the lower scale in nanometers. Courtesy/LANL

Background: The Most Energetic Particles in the Known Universe

Gamma rays (electromagnetic radiation of very high frequency) and cosmic rays (subatomic particles of very high energy) are products of the most energetic and cataclysmic events in the known universe. These phenomena include the collisions of two neutron stars, the explosions of supernovae, binary systems of stars with stellar accretion, and active gal actic nuclei which host black holes millions of times more massive than the sun.

When high-energy cosmic rays and gamma rays reach the Earth, they interact with air molecules in the upper atmosphere. Gamma rays, for example, are converted into pairs of charged matter and anti-matter particles (mainly electrons and positrons). These particles rapidly interact with other air molecules, producing additional gamma rays of reduced energy, which then create further charged particle pairs. This chain reaction proceeds until a large cascade of particles and radiation reaches ground level, where it can be recorded in the HAWC detectors.

When the charged particle cascade from an extra-terrestrial gamma ray passes through a Cherenkov detector, its particles are traveling faster than the speed of light in water. The resulting effect is similar to the shock wave produced in the atmosphere by a supersonic airplane (a “sonic boom”), but instead of producing sound the particles produce a visible cone of light. The flash of light, called Cherenkov radiation, is measured by the light sensor fixed to the bottom of each detector in HAWC. By combining the light signal observed in many tanks with fast electronics and high precision computing equipment, it is possible for scientists to determine the time of arrival, energy, and direction of the original extraterrestrial gamma ray or cosmic ray.