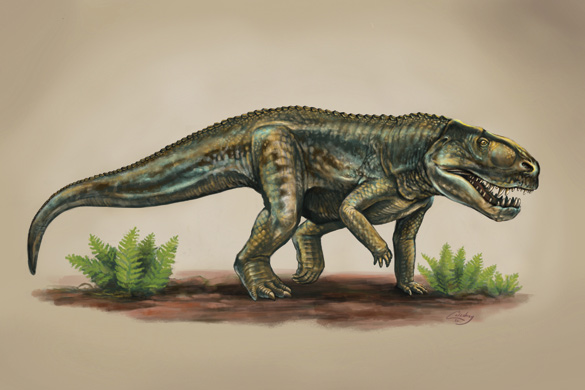 For many years the area around Ghost Ranch in Northern New Mexico has been spooked by phantom monsters and the specter of death. The spirit of the area was captured in the iconic cow skull motif in Georgia O’Keefe’s paintings, inspired by what was for her a common, everyday object.

Legends of wizards and witches and tales of giant snakes that ate children were just an aspect of the landscape that took on a new dimension when paleontologists began to mine several quarries of old bones in that vivid and alien environment related to the petrified forests and painted deserts of the Southwest. The shifting landscape has exposed several deposits known as the Chinle Formation, now geologically linked to the Triassic period which is dated between 199 and 251 million years ago.

Surprisingly rich fossil beds in those parts continue to serve as a source of information about the ancient layers of life on earth, and especially about that mysterious Triassic period between mass extinctions, which is when the dinosaurs first found their niche. At that time the land mass on Earth was still a single supercontinent known now as Pangaea, and the formations we see at Ghost Ranch were located within 10 degrees of the Equator.

In 2009 an international group of researchers, led by Sterling Nesbitt, then a postdoc at the University of Texas and now an assistant professor of geosciences at Virginia Tech, found a few seemingly related pieces of ancient remains that were catalogued, sealed and set aside in storage at Ghost Ranch.

“So much material comes in each year that researchers cannot look through all of it,” said Emily Lessner, a Virginia Tech sophomore at the time. “When I was at Ghost Ranch in 2014, Sterling was looking through drawers and decided that these pieces were interesting, and so we brought them back to Virginia Tech for further investigation.”

A few more pieces that that seemed to belong to the same creature turned up and they were added on another visit, before Lessner began the technical analysis.

The sparse elements of the animals’ jaws, skull and hips were cleaned up and prepared for cross-sectional computerized X-ray scanning that provided 1,521 slices of data.

In September 2016, Lessner was the lead author of a paper in the open science journal PeerJ. The report concluded that the assembled pieces belonged to three separate individuals of the same new species, classified as a member of the rauisuchid group of carnivorous archosaurs that include dinosaurs and a family that would evolve into the current era as crocodiles and alligators.

While trying to come up with a name for the large, four-legged animal she was conceptually piecing back together, Lessner recalled, she read some books about the history of Ghost Ranch and learned that it used to be the hiding place of notorious cattle rustlers who intimidated people by threatening to feed their children to a monstrous 20- to 30-foot snake known as Vivaron.

Impressed by the rough parallel with her own discovery, which was determined to be 14 to 17 feet long, Lessner chose to name her discovery Vivaron haydeni after a Spanish folk tale from the Spanish Colonial period and the Hayden Quarry where it was found.

Previously identified members of the rauisuchid family, including the nearest example found in Texas, had all been grouped together in past studies, but Lessner said this one was different. “It was pretty evident from the beginning that Vivaron was a new species because the main jaw bone that we were focusing on was missing the large ridge present on the jaw bone (maxilla) of the species from Texas, Postosuchus,” she said. “From there other differences appeared as we investigated the jaw bone and others more in depth.”

Finding the new species offers a start on what the research paper calls the challenge of defining the complex relationships within a growing assortment of large, quadrupedal Triassic predators, still based on relatively few examples.

“This is the second species of this type of animal (a rauisuchid) to be discovered in the southwestern United States and the sixth overall member of this group in the world,” Lessner added. “It was a major predator of its time and based on animals recovered from the Southwest and those recovered with other rauisuchids in Europe, these animals could survive on variable diets and in variable climates.” The expanded range and speciation are key findings.

As the research progressed and the decision to publish the results was made, the investigators turned to Matt Celeskey for a portrait of their find. A veteran exhibit designer and natural history illustrator, Celeskey works with the Museum of New Mexico.

“I am an unabashed advocate of paleontology,” he said in an interview this week, noting that the better known appearance of the Postosuchus influenced his rendering of Vivaron.

“I like to think of this as a hypothesis, a best guess composite,” he said. From the skeleton, he was able to reconstruct some of the flesh areas, but this kind of first look may well need to be revised as more information comes in.

One very important feature was inclusion of the observation that Vivaron lacked a very distinctive bone (the large ridge in the jaw bone) that connected into the cheek.

“Whether it was a buttress or display thing, I don’t know, but Vivaron doesn’t have that, so I didn’t put that in,” Celeskey said.

Lessner said she liked the coloring. “Though it is speculative because of our lack of knowledge, this animal would have lived in a lush environment alongside braided rivers, so I imagine these colors would have allowed it to camouflage perfectly.”