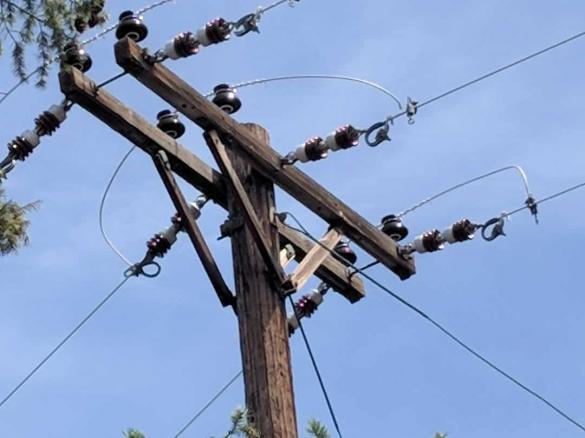 A loose connection on a powerpole near the Los Alamos Ice Rink on West Road caused a small fire Thursday afternoon, which was quickly extinguished by Department personnel. Courtesy photo 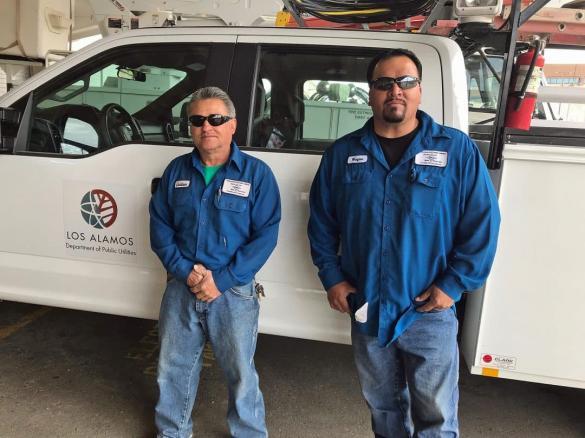 New details have been released about a small fire Thursday close to the Los Alamos County Ice Rink on West Road. Two linemen working with the County’s Department of Public Utilities Electricity Distribution Division, Julian Suazo and Wayne Valdez, observed something peculiar happening with the power lines and went to investigate. DPU officials believe an electrical connection on a power pole came loose and the resulting arcing caused molten metal to fall to the ground, which ignited the small fire.

When Suazo and Valdez arrived at the ice rink, someone told them that there was a fire and shortly thereafter a Los Alamos Police Department officer arrived and was asked by the two men to notify Los Alamos Fire Department to wait until they shut off the power to the area.

Suazo and Valdez proceeded to the fuse cut-outs box on Trinity Drive and terminated power to the area. LAPD controlled access to West Road throughout the duration of the fire, which was quickly extinguished by LAFD personnel and it remained closed until the electrical problem was addressed.

Although the fire has not grown much since Thursday because of low temperatures, high humidity and light snowfall, it is estimated at 1,000 acres. Residents of the area are on pre-evacuation alert and have been asked to be prepared to leave at a moment’s notice if necessary.

New Mexico fire officials say a Type 1 Incident Management team has been ordered to manage both the Bluewater Fire and the nearby Diener Canyon Fire, which also has burned more than 1,000 acres. Winds today are expected to be slightly lighter and cooler temperatures were predicted.