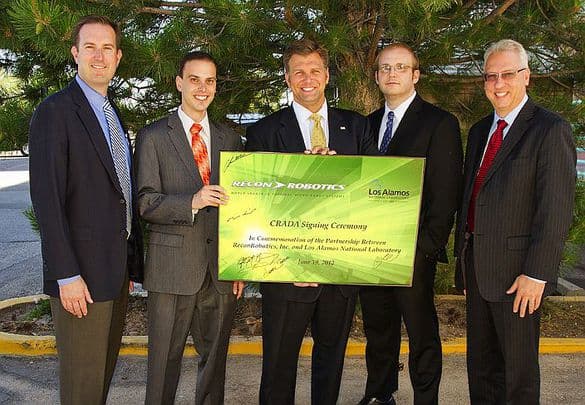 From left, David Pesiri and David Seigel of the LANL Technology Transfer office, and Andrew Borene, Andrew Drenner, and Patrick McKinney of ReconRobotics agreed to coordinate on technical advances for the robotics company’s line of tactical micro-robot systems. Courtesy/LANL

Miniature robots are about to get an intelligence boost from a new partnership, linking Los Alamos National Laboratory (LANL) and ReconRobotics, Inc.

Representatives from the two organizations announced today that they have signed a cooperative research and development agreement to “identify, evaluate and develop a range of mutually beneficial technologies,” efforts that will assist LANL in its mission-related activities for the U.S. Department of Energy and create value for ReconRobotics shareholders.

Among the areas of research are systems related to sensing technologies, communications and autonomy.

“This is an exciting partnership, we can really have an impact in the transition from laboratory ideas to real-world technology improvements,” said David Pesiri, LANL’s Technology Transfer division leader, “especially involving a firm such as ReconRobotics with an established track record for such clients as the U.S. Army, Navy, Marine Corps and the Federal Bureau of Investigation.”

The robotics firm is known for its tactical micro-robot systems such as the Throwbot® XT, a throwable micro-robot weighing 1.2 pounds that provides both video and audio reconnaissance of dangerous or hostile environments.

More than 2,000 of the company’s micro-robot systems are deployed by the U.S. military in Afghanistan, and in June the company announced an IDIQ (Indefinite Delivery/Indefinite Quantity) contract with the U.S. Army for another 1,000 units.

In addition, more than 500 law enforcement agencies around the world use these same systems to gain immediate situational awareness and greater standoff distance during high-risk SWAT and counter-terrorism operations.

“We believe that this collaboration will enable our company to bring unique, life-saving reconnaissance capabilities to our customers in the near future,” said Patrick McKinney, chief operating officer for ReconRobotics. “We are honored to be working with the world-class team at Los Alamos, and we are very excited about leveraging our collective capabilities to solve the real-world challenges that our warfighters and first responders face every day.”

ReconRobotics is the world leader in tactical, micro-robot systems. The company’s Recon Scout® and Throwbot® systems save lives by providing immediate situational awareness and greater standoff distance to warfighters and law enforcement personnel.

ReconRobotics is based in Edina, Minnesota, USA and markets its products through a distribution network in 33 countries.