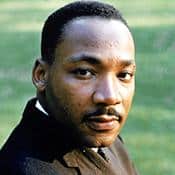 It is observed on the third Monday of January each year. King’s birthday is Jan. 15. The holiday is similar to holidays set under the Uniform Monday Holiday Act. The earliest Monday for this holiday is Jan. 15 and the latest is Jan. 21.

King was the chief spokesperson for nonviolent activism in the Civil Rights Movement, which successfully protested racial discrimination in federal and state law. The campaign for a federal holiday in King’s honor began soon after his assassination in 1968.

President Ronald Reagan signed the holiday into law in 1983, and it was first observed three years later. At first, some states resisted observing the holiday as such, giving it alternative names or combining it with other holidays. It was officially observed in all 50 states for the first time in 2000.

The idea of Martin Luther King Jr. Day as a holiday was promoted by labor unions in contract negotiations. After King’s death, U.S. Representative John Conyers (a Democrat from Michigan) and U.S. Senator Edward Brooke (a Republican from Massachusetts) introduced a bill in Congress to make King’s birthday a national holiday.

The bill first came to a vote in the U.S. House of Representatives in 1979. However, it fell five votes short of the number needed for passage. Two of the main arguments mentioned by opponents were that a paid holiday for federal employees would be too expensive and that a holiday to honor a private citizen would be contrary to longstanding tradition (King had never held public office). Only two other figures have national holidays in the U.S. honoring them: George Washington and Christopher Columbus.

Soon after, the King Center turned to support from the corporate community and the general public. The success of this strategy was cemented when musician Stevie Wonder released the single “Happy Birthday” to popularize the campaign in 1980 and hosted the Rally for Peace Press Conference in 1981. Six million signatures were collected for a petition to Congress to pass the law, termed by a 2006 article in The Nation as “the largest petition in favor of an issue in U.S. history”.

Senators Jesse Helms and John Porter East (both North Carolina Republicans) led the opposition to the holiday and questioned whether King was important enough to receive such an honor. Helms criticized King’s opposition to the Vietnam War and accused him of espousing “action-oriented Marxism”. Helms led a filibuster against the bill and on Oct. 3, 1983, submitted a 300-page document to the Senate alleging that King had associations with communists. Democratic New York Senator Daniel Patrick Moynihan declared the document a “packet of filth”, threw it on the Senate floor and stomped on it.

President Ronald Reagan originally opposed the holiday, citing cost concerns. When asked to comment on Helms’ accusations that King was a communist, the president said “We’ll know in thirty-five years, won’t we?”, referring to the eventual release of FBI surveillance tapes that had previously been sealed. But on Nov. 2, 1983, Reagan signed a bill, proposed by Representative Katie Hall of Indiana, to create a federal holiday honoring King. The bill had passed the Senate by a count of 78 to 22 and the House of Representatives by 338 to 90, veto-proof margins. The holiday was observed for the first time Jan. 20, 1986. It is observed on the third Monday of January.

The bill also established the Martin Luther King Jr. Federal Holiday Commission to oversee observance of the holiday, and Coretta Scott King, King’s wife, was made a member of this commission for life by President George H. W. Bush in May 1989.