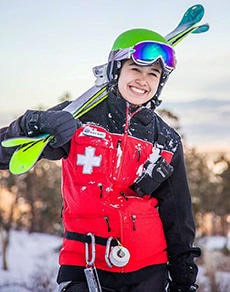 Natalie Aulwes, a 2020 Los Alamos High School graduate, has a lot of ties in the local Girl Scout program and recently made her mark on the national level in earning the Girl Scouts National Gold Award.

Aulwes received the award as a result of her service projects, which included constructing a new helicopter pad at Pajarito Mountain to transport injured patients out of the ski area and hosting a workshop to introduce young girls to STEM  (science, technology, engineering and mathematics).

While Aulwes said receiving the award was a surprise, she added, “I’m excited to be able to celebrate with all these other amazing recipients.”

Each year, 10 Girl Scouts from across the nation receive the national gold award. The honor is given to scouts who complete projects that “demonstrate extraordinary leadership, had a measurable and sustainable impact, and addressed a local challenge related to a national and/or global issue”, according the Girl Scouts website.

It is further reported on the website that Girl Scout Councils select their top local gold award recipients for the national award and Girls Scouts USA staff and a panel of judges ultimately pick the 10 awardees from these nominations.

The award winners are announced in July. Besides the recognition, Aulwes received a $20,000 scholarship and is now a Girl Scout Ambassador.

Aulwes has been a member of the ski patrol since she was 15 years old. In fact, her whole family is involved in the organization. So, she learned that the original helicopter pad at the base of the ski hill wasn’t cutting it. A second pad would reduce the amount of time it would take to get injured individuals transported off the mountain, Aulwes said.

As a result, Aulwes worked with her fellow ski patrol colleagues to construct an additional helicopter pad at the upper western side of the townsite ski lift. She explained she designed and drafted plans for the pad in April 2019 and construction finished in June 2019. Funds for the project came from donations and Aulwes’ own pocket.

She said one of the project’s challenges was getting the equipment up to the helicopter pad site and clearing the area.

However, “all in all it worked out and the helicopter paid is up and running, which is super exciting,” Aulwes said.

Aulwes did not stop there. She wanted to share her enthusiasm for STEM with other young girls and encourage them to pursue STEM in their future careers.

In August 2019, Aulwes hosted a STEM workshop at Project Y. About 20 participants attended the two-hour program, which Aulwes said she planned and presented herself. She had the participants do their own three-dimensional modeling and incorporated her helicopter pad project as an example of real-world application of STEM.

A real highlight of the workshop, Aulwes said, was “seeing all these young women so excited about figuring out how to do the 3-D drawing … what was exciting was after the two hours were up some didn’t want to leave!”

Aulwes has been a Girl Scout since she was six years old and joined Troop 116. Her troop has a positive impact on her life, she said.

“I think just having a really great group of young women pushing me to succeed,” Aulwes said. “They helped introduce me to robotics and engineering.”

She was a member of her troop’s robotics Lego League, which competed in the national competition in 2014.

“They were a really great team,” Aulwes said. “Just being able to make those friendships … it kind of pushed me to want to pursue my gold award.”

Girl Scouts in general has been a positive influence, she added.

“It’s such a good community to have … you’ll always have someone to rely on,” Aulwes said.

Aulwes credited her troop co-leaders Ryn Herrmann and Nan Holmes for providing such a great experience as well as her Lego League coach Karen Doebling.

“I’m super thankful for all the women in my life,” she said.

Aulwes is a freshman at Texas A&M. She is pursuing a degree in bio-medical engineering.