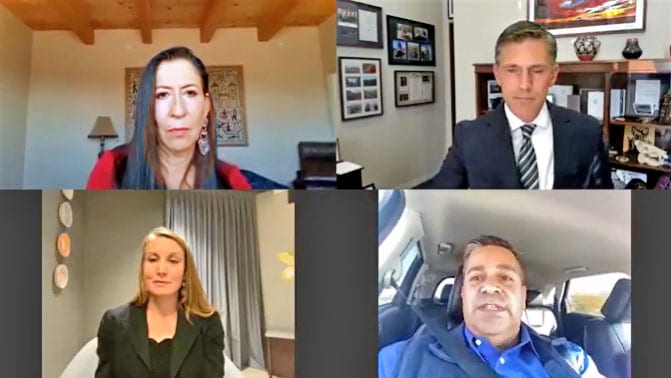 The bill includes billions of dollars to invest in transportation, energy, and water infrastructure and a number of provisions championed by the lawmakers and is the largest long-term investment in our infrastructure and competitiveness in nearly a century.

This legislation passed both the U.S. Senate and U.S. House of Representatives and now goes to President Joe Biden to be signed into law.

The Build Back Better Act, which lowers costs, creates jobs, and cuts taxes, while tackling the climate crisis, is also advancing in Congress. It is estimated that the two bills combined will add on average 1.5 million jobs per year for the next 10 years.

“This historic infrastructure package complements the American Rescue Plan, the major pandemic and economic recovery bill that we passed earlier this year. It will mean hundreds of thousands of good-paying jobs and ensure that our nation’s infrastructure meets 21st century needs. I was proud to secure substantial investments in transmission, clean energy, water infrastructure, wildfire mitigation, and hydrogen,” Heinrich said. “We now need to move quickly on the Build Back Better Act to respond to the climate crisis, lower costs for families, and make the wealthiest earners and large corporations pay their fair share. Democrats in our federal delegation recognize the challenges facing our state and the incredible opportunity we have right now to do something about it. I will continue to do everything I can to make a real difference in the lives of New Mexicans.”

“From tackling the climate crisis head on, to expanding broadband access, and providing a much-needed boost to small businesses – this bipartisan legislation pushes our country forward at the right moment, precisely when help is needed the most. The Bipartisan Infrastructure Investment and Jobs Act takes historic steps to put an end to drunk driving with the inclusion of my RIDE Act – legislation I authored that will require advanced drunk driving technology in all new vehicles so no more families have to endure the heartache of losing a loved one. The legislation also includes my REGROW Act, legislation that I authored to clean up the thousands of orphaned oil and gas wells that leak methane and pose serious health risks to our communities. This is an issue that I have been working on since March 2020 as a member of House Leadership. And now it’s absolutely critical the United States Senate presses forward to finish the job and deliver the Build Back Better Act for the American people,” Luján said.

“Last week, I was proud to vote in the House to pass the bipartisan Infrastructure Investment and Jobs Act to send over $3.7 billion to New Mexico. This bill will create thousands of good-paying jobs for New Mexicans to modernize our roads, bridges, water, and broadband infrastructure,” Stansbury said. “This is game-changing for our communities, especially our rural and Tribal communities and small businesses. But funding for our physical infrastructure alone isn’t enough — we must invest in our working families by passing President Biden’s full agenda with the Build Back Better Act.”

“The passage of the Infrastructure Investment and Jobs Act is a win for every community in New Mexico. I’m proud to have helped secure investments in broadband, water infrastructure, including the Navajo Gallup Water Supply Project, and funding to plug orphaned wells,” Leger Fernández said. “This bill is important for New Mexicans, and we’re not done yet. We must now pass the Build Back Better Act to reduce the cost of prescription drugs, extend the expanded Child Tax Credit, provide paid family leave, free pre-k, and tax cuts for families and workers. Our communities need us to invest in the values and heart of our nation. The Build Back Better Act es para la gente, for our community, and we need it now.”

Specifically for New Mexico, the Infrastructure Investment and Jobs Act will:

Repair and rebuild our roads and bridges with a focus on climate change mitigation, resilience, equity, and safety for all users, including cyclists and pedestrians. Based on formula funding alone, New Mexico would expect to receive $2.5 billion for federal-aid highway apportioned programs and $225 million for bridge replacement and repairs under the Infrastructure Investment and Jobs Act over five years. New Mexico can also compete for the $12.5 billion Bridge Investment Program for economically significant bridges and nearly $16 billion of national funding in the bill dedicated for major projects that will deliver substantial economic benefits to communities.

Build a network of EV chargers to facilitate long-distance travel and provide convenient charging options. The U.S. market share of plug-in electric vehicle (EV) sales is only one-third the size of the Chinese EV market. The bill invests $7.5 billion to build out the first-ever national network of EV chargers in the United States and is a critical element to accelerate the adoption of EVs to address the climate crisis and support domestic manufacturing jobs. Under the Infrastructure Investment and Jobs Act, New Mexico would expect to receive $38 million over five years to support the expansion of an EV charging network in the state. New Mexico will also have the opportunity to apply for the $2.5 billion in grant funding dedicated to EV charging in the bill.

Help connect more Americans to reliable, affordable high-speed internet. 10.7% of New Mexicans live in areas where, under the FCC’s benchmark, there is no broadband infrastructure. Even where infrastructure is available, broadband may be too expensive to be within reach. 21% of New Mexico households do not have an internet subscription. Under the Infrastructure Investment and Jobs Act, New Mexico will receive a minimum allocation of $100 million to help provide broadband coverage across the state, including providing access to the at least 223,941 New Mexicans who currently lack it. And, under the Infrastructure Investment and Jobs Act, 785,000 or 38.1% of people in New Mexico will be eligible for the Affordability Connectivity Benefit, which will help low-income families afford internet access.

Prepare more of our infrastructure for the impacts of climate change, cyberattacks, and extreme weather events. From 2010 to 2020, New Mexico has experienced 14 extreme weather events, costing the state up to $5 billion in damages. Under the Infrastructure Investment and Jobs Act, based on historical formula funding levels, New Mexico will expect to receive $38 million over five years to protect against wildfires and $13 million to protect against cyberattacks. New Mexicans will also benefit from the bill’s historic $3.5 billion national investment in weatherization which will reduce energy costs for families.

Improve clean drinking water access and reduce the nation’s lead service lines and pipes. Currently, up to 10 million American households and 400,000 schools and child care centers lack safe drinking water. Under the Infrastructure Investment and Jobs Act, based on the traditional state revolving fund formula, New Mexico will expect to receive $355 million over five years to improve water infrastructure across the state and move us closer to ensuring that clean, safe drinking water is a right in all communities.

Improve our nation’s airports. The United States built modern aviation, but our airports lag far behind our competitors. Under the Infrastructure Investment and Jobs Act, airports in New Mexico would receive approximately $90 million for infrastructure development for airports over five years.