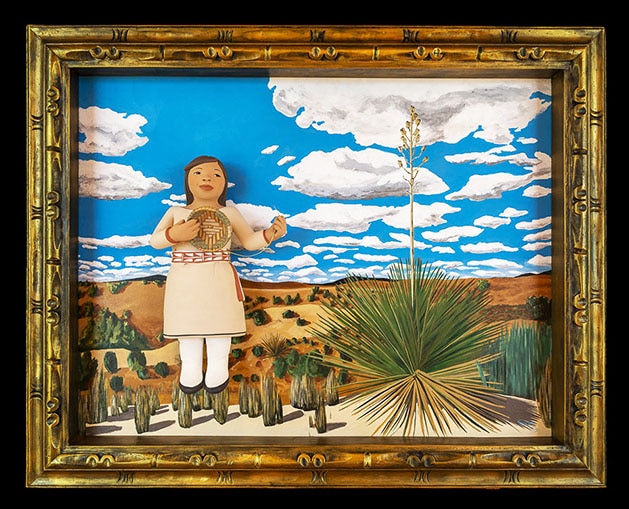 Native Treasures is traditionally an in-person event held Memorial Day weekend at the Santa Fe Community Convention Center, however this year’s art market was canceled due to the public health crisis.

Native Treasures supports Native American artists and their communities while also benefiting the exhibitions and education programs at the Museum of Indian Arts & Culture (MIAC). Over the past 15 years, Native Treasures has generated approximately $5 million in support of MIAC. Proceeds from the auction will be split 50-50 between participating artists and the Museum.

Kathleen Wall (Jemez Pueblo) will serve as the MIAC Living Treasure artist for 2020-2021. While Wall began her artistic journey making storytellers, she knew all along in her heart that she would transcend the traditional art that she was taught. During her late teens, Wall’s works began to take on more figurative qualities. The artist contends that she was “a young girl in the midst of something I had a passion for.” The museum will showcase Wall’s art in a MIAC Living Treasure exhibit over the next two years

For more information and to register to bid, visit www.museumfoundation.org/native-treasures

As the 19th century closed, one of the Southwest’s major “attractions” was its vibrant Native American cultures. In response to unsystematic collecting by Eastern museums, anthropologist Edgar Lee Hewett founded the Museum of New Mexico in 1909 with a mission to collect and preserve Southwest Native American material culture. Several years later, in 1927, John D. Rockefeller founded the renowned Laboratory of Anthropology with a mission to study the Southwest’s indigenous cultures. In 1947 the two institutions merged, bringing together the most inclusive and systematically acquired collection of New Mexican and Southwestern anthropological artifacts in the country.

Events, news releases, and images about activities at the Museum of Indian Arts & Culture and other in divisions of the Department of Cultural Affairs can be accessed at media.newmexicoculture.org