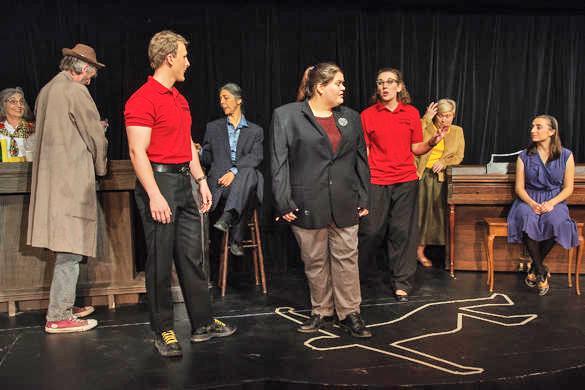 The cast of ‘Murder at the Lone Elm’ prepare for opening night. There will be a special New Year’s Eve performance. Photo by Larry Gibbons 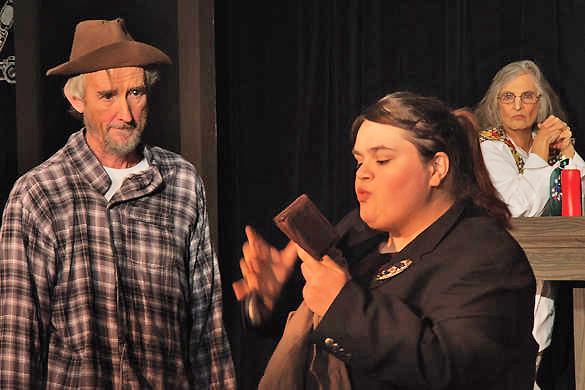 In the Los Alamos Little Theatre’s production of ‘Murder at the Lone Elm,’ the audience gets to help nabb the murderer. Photo by Larry Gibbons

With a murderer on the loose and the body count rising, Dana Hunt has to throw out her police training and turn to a new source for leads — the audience.

Los Alamos Little Theatre’s January production, “Murder at the Lone Elm,” is an interactive murder mystery in which the audience gets to help the head of hotel security try to figure out who is murdering people at the Lone Elm Inn.

Questions from the audience help elicit information from the multiple suspects, and during intermission audience members are asked to write down who they think the murderer is. Correct guesses will go into a drawing for prizes at the end of the show.

The show, written and directed by Miles Ledoux, opened with a special New Year’s Eve presentation, and its regular run continues Jan. 4-19 with shows at 7:30 p.m. Fridays and Saturdays. A 2 p.m. matinee will be performed Sunday, Jan. 13.

Ice cream and toppings will be served at all performances, so audience members should arrive early so they can get their dessert and seats before the mystery — and murder — begins. Doors open at 7 p.m.

The cast features an eclectic mix of LALT veterans and newcomers. To a person, they are excited about the prospects of engaging with the audience as they bring their characters and the play to life.

Megan Pimental, who plays Emily Reynolds, a character with both tragedy and mystery in her background, said, “The show is fun and exciting and super interactive. I like how the audience interaction means our dialogue will change every night.”

Ledoux said, “In the first murder mystery production I was involved in, I was thrilled to have a chance to interact with the audience–fourth wall be darned. When I started writing my own murder mystery plays, I experimented with ways to make the interactive parts spontaneous, but also such that they would advance the plot. Every production I’ve put on has been an opportunity to fine-tune this approach.”

She added that as an actor it means “you have to think on the spot and come up with a response” to unscripted questions.

LALT newcomer Aaron Waller, who plays Trevor Fallon, a new hotel employee with an ambiguous background, said of the improvisational interactions, “It helps to have the character’s background and (for me to) know who Trevor is. If I forget, I revert to who Aaron is.”

All of the actors have had to develop a deep understanding of their character’s backstory so they can react consistently.

Shashi Charles, as the aggressive snoop Leonora Cooke, who has an ulterior mission, said her character is “haughty, terribly afraid that without her position she would be nothing, driven to succeed no matter who she has to barrel over, and mistakenly thinks she’s really sexy. Unfortunately, it was way too easy to possess this character.”

Teresa Bradford, new to LALT or any stage, portrays the impetuous and eager Gabby Peterson.

“My character is pretty unpredictable. It didn’t take me long to get used to playing Gabby, as soon as I could convince myself to get excited about dead bodies and murders,” Bradford said.

As with any good murder mystery, there are clues and red herrings and an ever-increasing body count.

The newcomers also have been enjoying their introduction to LALT. Terry Beery, who plays the madcap chef Henrietta Murphy, said, “I loved the audition; I thought it was a really great time.”

Matthew Waller, who plays the unlucky-in-love Ken Booth said, “It’s been fun because I’ve been able to learn about everything it takes to make a play work.”

Charles remarked of her attraction to theatre, “My motivation to be part of any production has always been the interesting fact that acting crazy in real life usually gets me in trouble, but on stage, people applaud.”

Other actors in the production are Gwen Lewis, Spook Kellum and Cassandra Bowman. Tickets for “Murder at the Lone Elm” are available at CB FOX, online at Brown Paper Tickets and at the door. Prices are $15 general admission and $13 for seniors or students.

Los Alamos Little Theatre is a member-driven, non-profit 501(c)3 organization that has been presenting community theatre since 1943 for the entertainment and engagement of Northern New Mexico audiences. Information about its season is available at www.lalt.org, where readers also can sign up for email notices of readings, auditions, performances and special events.