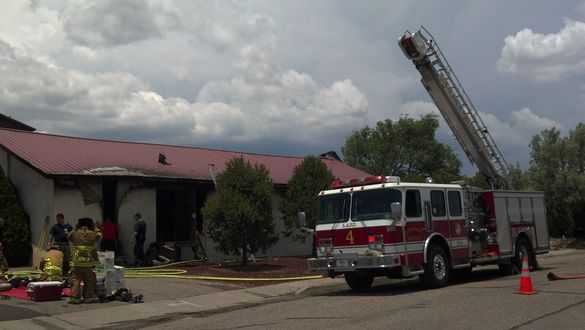 The state fire marshal has been called in to help Los Alamos fire investigators determine the cause of a fire this morning that destroyed the chapel at New Beginnings Fellowship Church, 112 East Road. Photo by Karen Kendall/ladailypost.com

A large fire broke out this morning in the chapel of the New Beginnings Fellowship Church, 112 East Road.

One firefighter was transported to Los Alamos Medical Center after a 5-inch coupling broke loose and injured his ankle as he battled the blaze.

No one else was hurt, Deputy Fire Chief Justin Grider said.

Grider described the scene saying the call came in at 10:22 a.m. and at 10:23 a.m.; firefighters and medics from Station 6 were entering the building.

"They felt intense heat in the common hallway and began battling a fire that had fully engulfed the sanctuary," Grider said. "The firefighters were able to contain the fire to the sanctuary but that area is a total loss."

The two-story building adjacent to the chapel, which houses offices and classrooms, suffered heavy smoke damage, Grider said, adding that on his initial walk through of the church, it appeared that the smoke damage could be cleaned, but it would be up to the insurance company to make that determination, "they may call the entire church a total loss."

The Los Alamos Daily Post spoke with Gwen King who discovered the fire (see video below). She is the children's pastor at the church and mother-in-law of New Beginnings Pastor Shawn Amburgey.

King recounted that as she entered the office at the New Beginnings Fellowship Church this morning, she noticed a door open and saw cabinet and desk drawers pulled ajar, which she recalled thinking was strange. No one else was inside, she said.

King looked toward the sanctuary and noticed the area appeared foggy. She called Amburgey and asked him to come to the church.

Amburgey arrived and she said that he immediately realized there was a fire and called the fire department.

"Luckily, they were right across the street and engines were here right away," she said.

Firefighters continued to soak the building for quite some time and fire investigators arrived on scene to search for the cause of the fire.

"Because it's a church, we also called in the state fire marshal just to have another set of eyes looking at it," Grider said. "This church has had several break ins over the last few months and if we determine that it's arson, the Los Alamos Police Department will be called in because then it becomes a criminal offense." 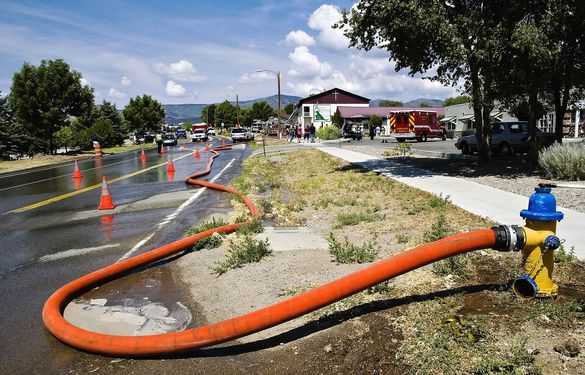 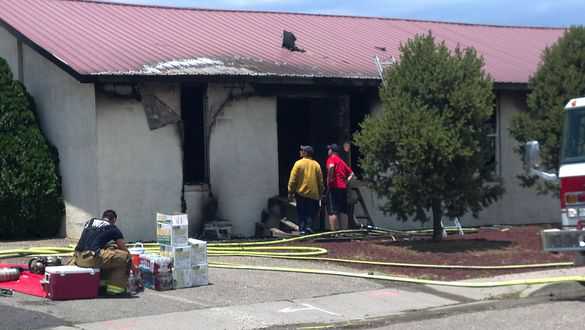 Smoke continues to rise from the chapel, which was fully engulfed in flames when firefighters arrived on scene just a minute after receiving the 10:22 a.m. call today. Photo by TK Thompson/ladailypost.com 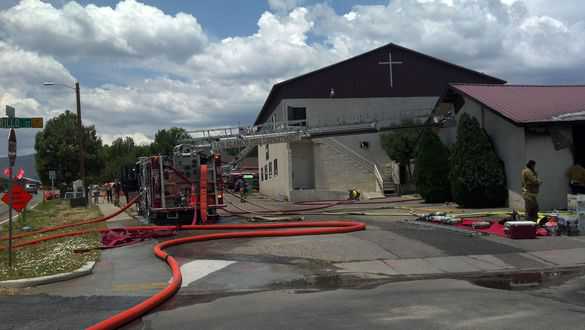 Firefighters remained on scene dousing the chapel and investigating the cause of the fire. Photo by Karen Kendal/ladailypost.com 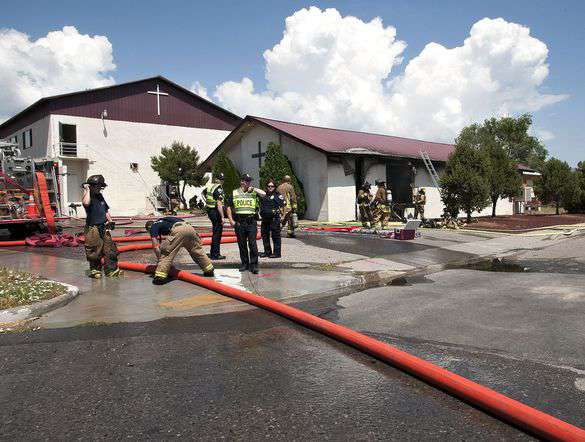