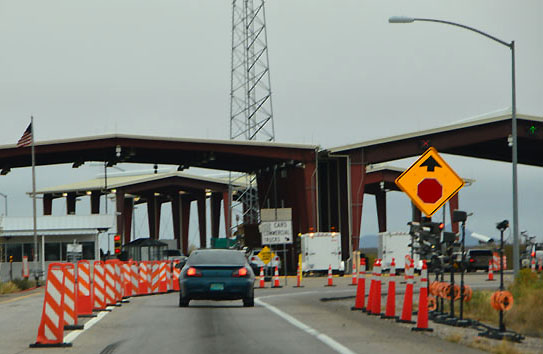 Travelers driving north Saturday on I-10 past Las Cruces are routed through this security checkpoint. The checkpoint is set up year round. Photo by Carol A. Clark/ladailypost.com

The Boston Herald reports that in 2014, the average daily number of those flagged for national security concerns was 548. CBP officials would not say how many of those flagged were discovered, upon closer examination, to be involved in terrorist activities. The officials did note, however, that some of those stopped for further investigation were stopped before they even board planes headed to the United States – the result of closer intelligence cooperation between U.S. intelligence agencies and their counterparts in other countries.

U.S. Rep. William R. Keating, D-Massachusetts, told the Herald that the U.S. faces the threat that terrorists could make their way into the country — particularly those carrying real or fraudulent European passports.

“These threats are not just global, the threats are back here at home because the access from Europe to the U.S. is much easier,” Keating said. “If you look at people who are European citizens,” he added, “they can travel here and if you’re not keeping track of what they’re doing, where they’re going, whether they have fraudulent passports — we are in real jeopardy.”

Jack Tomarchio, former principal deputy DHS undersecretary for intelligence and analysis operations, told the Herald that he was not surprised by the number of travelers flagged as national security concerns.

“At any given time, the FBI has reported they are focusing on 900 individuals in the U.S.,” Tomarchio said. “These may be al-Qaeda sympathizers or ISIS sympathizers. Some of these people may be more aspirational than operational, but then again it only takes one.”

Julie Myers Wood, a former top DHS official, said some travelers are banned from entering the United States because of criminal records in their country of origin, but others are kept out because they are on terrorist watch lists.

“I think the recent attacks really show the need for vigorous information sharing and that’s an issue where there have been a lot of issues in the past few years,” Wood told the Herald. “It’s not going to help us that Belgium tells us three weeks from now that someone crossed over to the U.S. yesterday. We need to get information in real time.”