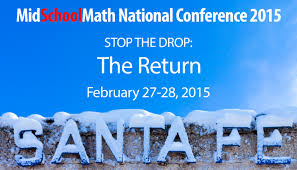 TAOS – Hundreds of middle school mathematics teachers and school district professionals from around the country will convene in Santa Fe this week for the MidSchoolMath conference, the brainchild of two Taos entrepreneurs.

Poised to change the way mathematics are taught in middle school classrooms nationwide, MidSchoolMath addresses the drop known as the Mid School Math Cliff – the most precipitous decline in mathematics competency in the world, as documented by the past few generations of American children.

MidSchoolMath will soon release a new online learning game, Empires, that was piloted in two New Mexico school districts this year. “I have not seen any other activity engage students as thoroughly, and over a sustained time period, as Empires,” said Brooke Turnquist, math teacher at Santa Fe Public Schools.

Years of teaching mathematics at the middle school level in Questa,N.M., led Scott Laidlaw, Ed.D., to found the company in 2009 along with Jennifer Lightwood, CPA. Building on the story-based games Laidlaw developed while teaching, the company has been delivering innovative mathematics curriculum through immersive, multimedia environments that has attracted funding of more than $1.6 million.

Laidlaw began working with local business development resource groups at the company’s inception. The market research, analysis and cheerleading through the Regional Development Corporation was absolutely critical in the early stages, and paved the way for them to receive a Venture Acceleration Fund (VAF) award in 2011 – an investment that year in northern New Mexico businesses by Los Alamos National Security, LLC, and Los Alamos National Laboratory.

MidSchoolMath went on to attract national attention. Awarded a $500,000 grant from the Bill and Melinda Gates Foundation and the William and Flora Hewlett Foundation, the company received a $1.05 Federal SBIR grant to develop Empires, the game they are releasing this year.

The first release by MidSchoolMath, award-winning Ko’s Journey, engages students in a virtual world, sending them on an ancient rite-of-passage while affirming the Common Core State Standards for the grade level.

“We’re interested in teachers, and what they have to say about what truly works in the classroom,” Laidlaw said. “This conference is in its second year, and I’m looking forward to the feedback from teachers on how they anticipate Empires changing curriculum in their own classrooms.”

The conference takes place at Santa Fe Community Convention Center Feb. 27 and 28, 2015. The agenda is packed with sessions dedicated to mathematics culture and practices in the classroom. For registration information or to contact Laidlaw for a private consultation, visit www.midschoolmath.com.

MidSchoolMath is an educational technology company established in 2009 by Scott Laidlaw, Ed.D. and Jennifer Lightwood, CPA. The company is founded on the idea that storytelling, the oldest architecture of human learning, has the power to transform student attitudes, improve test scores and establish a solid foundation for future learning. MidSchoolMath is the creator of the award-winning online math game, Ko’s Journey, the feature-length documentary film The Biggest Story Problem, and will be releasing the online math game Empires and the innovative MidschoolMath Software Suite this year. Learn more at midschoolmath.com.