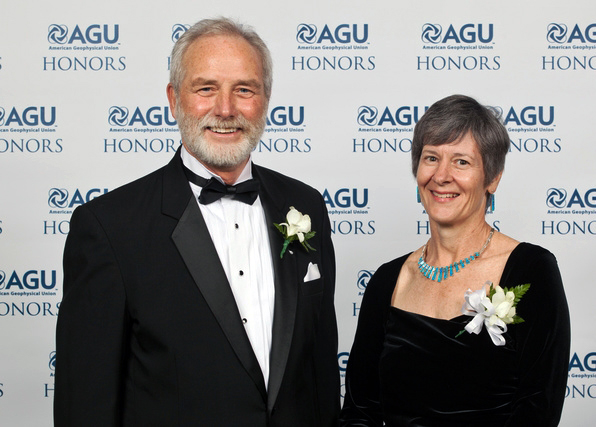 Michelle Hall of Los Alamos with Michael McFadden, President of the American Geophysical Union at an awards ceremony last month in San Francisco at which Hall was honored. Courtesy photo

Hall is a geophysicist and science educator who is married to Terry Wallace, Principal Associate Director of Global Security at Los Alamos National Laboratory.

“I have always tried to pursue things that stir my passion. Work becomes play when I am doing things I really love and find meaningful,” Hall told the Los Alamos Daily Post when her award was first announced last fall. “I am fortunate to have had opportunities to work on a variety of projects serving K-12 teachers and students, undergraduate students, my peers in science and the public. And, I am lucky to have worked with and been helped by many other talented and passionate people.”

Hall owns Science Education Solutions, 4200 West Jemez Road, which is active in a wide range of programs to help learners of all ages discover and understand the world through science.

Hall developed the Cafe Scientifique program in New Mexico for which she has been selected to receive a $2.6 million grant from the National Science Foundation to disseminate the program nationally.

Café Scientifique New Mexico is a free, fun way for teens to explore the latest ideas in science and technology. Stimulating conversations with scientists, engineers, and inventors take place in an informal and relaxed setting. Free food is served!

The program is run by teens for teens at central locations in Los Alamos, Española/Pojoaque, Santa Fe and Albuquerque. It was inspired by the adult Café Scientifique programs that have become popular throughout the world.

All teens are welcome at any Café and Hall said she is always looking for energetic Youth Leaders to help guide and organize the Café meetings.

“I could not have done this without the help of people like Sharon Stover, who introduced me to teachers and the principals when I was new to the area. Dr. Tony Sena at Northern New Mexico College opened many doors to work with students and parents in Espanola and Pojoaque,” Hall said last fall. “LANL scientists have been outstanding in working with the teens in the program, and the LANL Community Programs Office has been instrumental in providing support for the effort.”