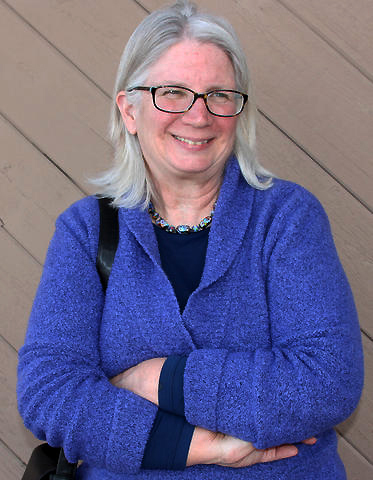 Meine has lived in Jemez Springs since 1994. She lived in Placitas from 1980 to 1990 before leaving the state for a few years. Meine and her husband Richard, both artists, enjoy the small town ambiance and appreciate the natural beauty of their home, she said.

The Jemez Springs Library has grown a lot since she worked there in the 90s, Meine said. She noted the contributions of the two previous library directors, Judith Isaacs and Eva Jacobson. Isaacs worked to get the library designated as a public library and Jacobson brought the library into the digital age with ebooks. Jacobson left the Jemez Public Library to join the staff of Mesa Public Library a few months ago.

Meine hopes to use her skills to bring more programs and exhibits to the Jemez Springs Library. She and an assistant will work with volunteers to provide services. “There is a really lively ‘Friends of the Library’ group in Jemez Springs,” she said.

Meine joined the staff at Mesa Public Library in 2002 and assumed her current role as program specialist about seven years ago. Since that time, she has managed the Library Gallery and organized adult programing, such as the popular “Quotes: Authors Speak” series. Meine often served as the public face of the library, handling publicity for its many events.

“We have been able to do so much at the library because of the contributions of volunteers like Jane Linn, who has organized the poetry gatherings for 10 years and Thad Hahn and Phil Klingner who have organize the film series for many years,” Meine said.

Meine has had a major role in putting the Library Gallery on the map. The only general purpose exhibition space in Los Alamos, the Gallery plays host to exhibits of all kinds, from art installations to history and science exhibits.

“When I first took over the gallery, the Museum of New Mexico came to look at the site and offer recommendations. They said it is one of the best public exhibit spaces in the state,” Meine said.

Meine’s contacts in the art community have helped to bring many wonderful art shows to the gallery. In addition, she has worked with other organizations to coordinate exhibits around local happenings, such as the Santa Fe Opera and science related exhibits during the annual Next Big Idea week.

Meine invites her many Los Alamos friends to visit her at the Jemez Springs Library, which is open Tuesday through Saturday.