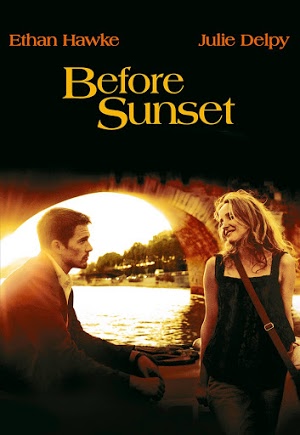 Those who love a good conversation, or more specifically, those who love analyzing the way a conversation moves its interlocutors from cautious to intimate, should check out “Before Sunset” (2004, rated R). It will screen at 6:30 p.m. Thursday in Mesa Public Library’s upstairs meeting room theater.

The award-winning film is part two of a trilogy shot over the span of nearly 20 years, beginning with 1995’s “Before Sunrise” and completing with 2013’s “Before Midnight.” Director/screenwriter Richard Linklater’s three films follow the romance of Jesse (Ethan Hawke) and Celine (Julie Delpy) by zooming in on three key days or nights.

“Before Sunset” takes place nine years after the couple — he from the U.S., she from France — meets in Venice, falls in love over the course of an overnight conversation, and then (small spoiler alert) fails to reconnect at an appointed time.

At the film’s opening, Jesse has written and published a novel based on their encounter, half-hoping that Celine might read it and rush into his arms. His book tour has taken him to Paris, where, indeed, the two reunite, though reality keeps threatening to interfere.

This is a romance with no action, unless you count walking, drinking coffee and tea, standing on a boat, and riding platonically in a car. Or rather, the film suggests the true action of this romance, and maybe any enduring love, comes from one mind reaching for and discovering another.

In other words, to walk the walk, you have to talk to talk. Hawke and Delpy, who co-wrote the script with Linklater, speak to each other in real-time throughout “Before Sunset,” progressing from awkward pleasantries to a stage where they seem to know exactly what the other is thinking. It’s fascinating to watch, and a good reminder of how important our words can be.

All screenings in the Mesa Public Library Free Film Series are free of charge, thanks to the Friends of Los Alamos County Libraries. The library shows movies on the first Thursday of nearly every month.