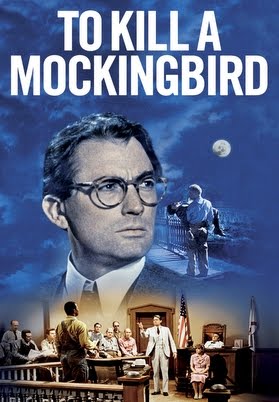 Movie poster for ‘To Kill A Mockingbird.’ Courtesy photo

The classic, triple-Academy-Award-winner “To Kill a Mockingbird” (1962, not rated) will screen at 6:30 p.m., Thursday in the upstairs meeting-room theater at Mesa Public Library.

The story, essentially of an African-American man charged with raping a white woman in 1930s Alabama, is seen through the eyes of 6-year-old “Scout” (Mary Badham), whose father, Atticus Finch (Gregory Peck), has agreed to defend the accused. Tom Robinson (Brock Peters) and his family face constant danger from enraged locals, as do Finch and his children.

While the adults in town fume and plot, Scout and her brother “Jem” (Phillip Alford) focus almost entirely on their eccentric neighbor, Boo Radley (Robert Duvall), the legendary lunatic who might or might not have stabbed his father in the leg. They run past his gate, too afraid to walk. They dare each other to enter his property and peer in his windows.

The institutionalized racism so painfully present in “To Kill a Mockingbird” had not been eliminated entirely by the 1960s, when Harper Lee’s book was published and Robert Mulligan’s movie released, and unfortunately, is still relevant today.

But, thanks to the film’s sidelong treatment of its subject matter, with the exception of the intense, and intensely memorable, court scene, the film retains a kind of innocence and even beauty. The prejudices that have corrupted so many of the townspeople have not poisoned everyone, certainly not Finch, Scout, and Jem. There are people, even in the smallest, most unjust of places, who will not only see but take risks for the truth.

“To Kill a Mockingbird” is part of the Mesa Public Library Free Film Series, which brings movies to the library’s upstairs meeting-room theater on the first Thursday of nearly every month. All screenings are free,  thanks to the Friends of Los Alamos County Libraries.

For more information, call the library at 505.662.8240 or check online at http://www.losalamosnm.us/library/Pages/default.aspx under “Upcoming Events.”