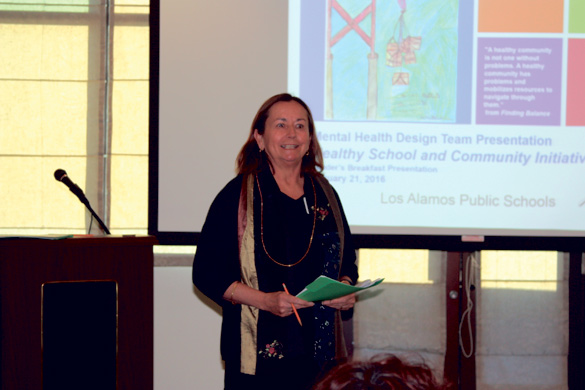 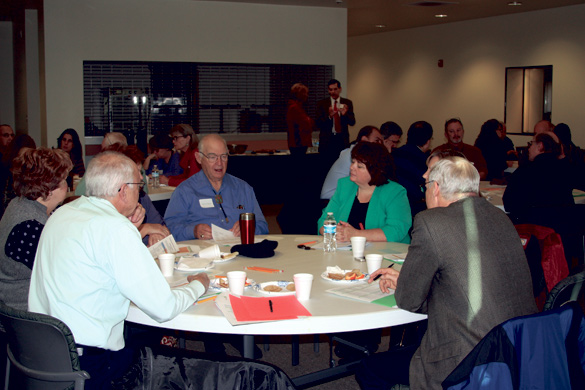 Employing the idea that it takes a village to raise a child, Los Alamos Public Schools is calling on the community to help implement improvements in the mental health of youth.

At a Community Leaders Breakfast Jan. 21, the LAPS Mental Health Design Team presented its findings to approximately 50 community members. The Breakfast was one in a series of planned events to share the findings of the Team and gather input from the community, who are invited to share their ideas and concerns with LAPS and each other.

Two upcoming Community Meetings on the topic are planned for:

The Mental Health Design Team was formed by the Los Alamos School Board to address perceived mental health problems among students in Los Alamos. It consists of mental health professionals, LAPS staff including two school counselors, and members of the School Board. The Team presented its findings to the Board in December and is now reaching out to the broader community. The Team’s report will be available on the LAPS website soon.

Extensive polling at Los Alamos Middle School and high school queried 1,300 students. The survey found the homework load to be the number one stress inducer among students, followed by feeling tired, academic pressure from parents and feeling bored.

Some students commented that they have up to five hours of homework every night and are assigned work over vacations and breaks, Harrison said.

When asked to name mental health concerns they and their friends experience, more than 700, or more than half, said anxiety. More than 600 said depression was a concern, while more than 300 sited self-harming behaviors and suicidal feelings. Around 175 students said addiction was a concern.

The Team presented more troubling data. Individuals seeking treatment at the Los Alamos Medical Center Emergency Room for suicidal ideation and attempts numbered 122 out of a County population of 18,000. This is 4.5 times greater than the national average. Around one-third of those treated were under 18.

The Team has developed both short and long-term recommendations. Among the recommendations were placing information and resources on the LAPS website between January and March 2016 and holding community outreach events, Harrison said. Longer term goals include looking at curriculum and scheduling in the schools, instituting school-based mental health services, training in mental health awareness for those working with youth and formation of a Suicide Action Team.

Breakfast attendees broke into small groups to brainstorm then presented their thoughts to the group at large. Many of the ideas and concerns overlap.

“Student voices rang out loud and clear in the survey,” Mountain Elementary Principal Jennifer Guy said. “We need to treat the root causes of stress and unless we mobilize the community, change will not happen.”

“As a school district, we need to have teeth,” agreed Cheryl Pongrantz of Los Alamos Family Council.

Mental health isn’t only a concern among youth, several groups said, mental health services are lacking on all levels in Los Alamos. Participants pointed to lack of psychiatrists and therapists, especially those that serve youth.

County services also are lacking, according to several of the groups.

“The County spends more on art in public places than on mental health by a factor of five,” youth activist Morrie Pongrantz said. He suggested the County sponsor training for those working with youth and also provide information and training on how to interact with mentally ill adults.

Several tables of attendees at the Jan. 21 event said they thought school counselors were overburdened by other duties and had no time to truly counsel students.

Also mentioned were building bridges between schools and the community at large, expressing the idea that it’s okay to be an average student, alternative learning models and reaching out to homeschooled students.

In closing, Harrison called on community leaders to do their part.