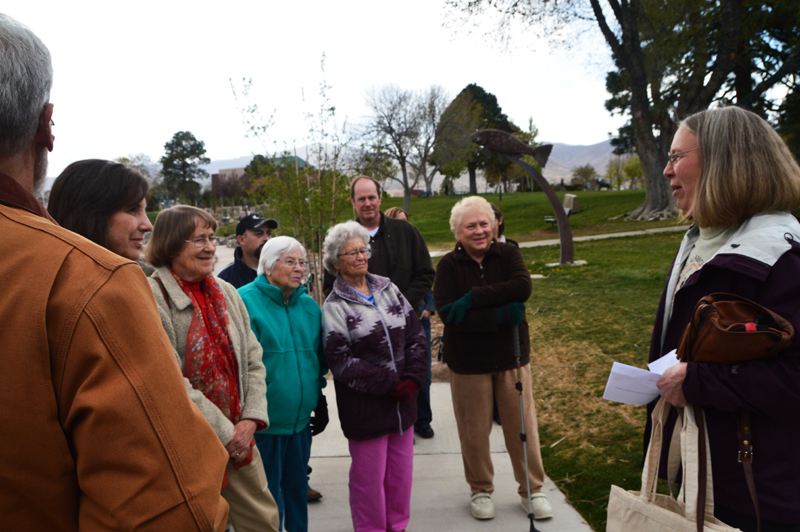 Wendy Swanson of LA Walks speaks to the crowd about the legacy of her mother in law ADA advocate June Ryti just before a special ceremony Thursday dedicating a park bench in her honor at Ashley Pond Park. ‘She served as an inspiration to many of us who promote handicap accessibility,’ Swanson said. Photo by Carol A. Clark/ladailypost.com 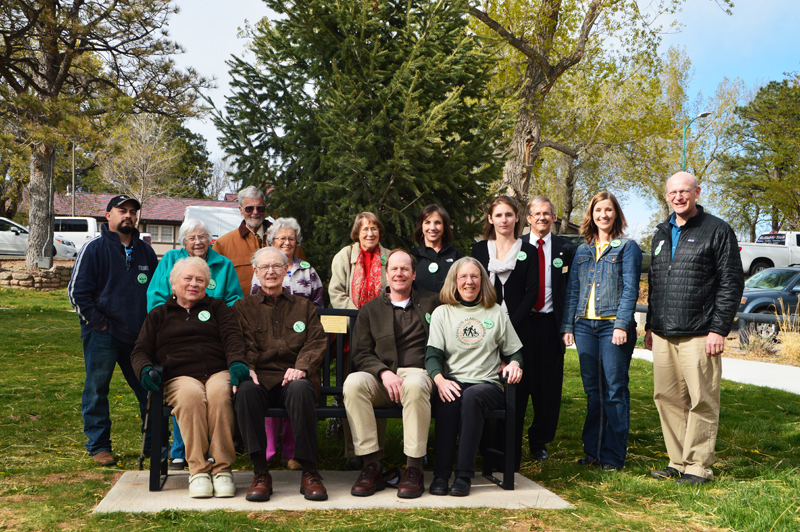 Members of LA Walks, friends, family, Transportation Board members and County officials gather for a photo around the park bench dedicated Thursday in honor of ADA advocate June Ryti at Ashley Pond Park. Photo by Carol A. Clark/ladailypost.com
By WENDY SWANSON
LA Walks

June Ryti died in September 2011 at the age of 91. She was a founding member of LA Walks and inspired our understanding of ADA issues. June was physically disabled but traveled via scooter from her condominium throughout the Los Alamos downtown.

As an enthusiastic LA Walks member, she actively contributed to our group functions. She was the “point person” in the “human engineering solution” that we formed in a walkability demonstration during our sponsored visit and workshop with Dan Burden.

She showed County Councilors what it took to maneuver a scooter on sidewalks during our “Take a Walk along Central” promotion of safe pedestrian crossings in downtown Los Alamos.

When the crossings were approved and constructed, June held a sign and celebrated at a public opening ceremony.

She voiced her opinions at a public forum for NM502/Trinity Drive design planning.

Beyond LA Walks, she spoke with a series of officials to win installation of the ADA automatic door opener at the community Post Office. She convinced the condominium developer where she lived to install an automatic door opener at the front entrance. June served two terms on the Los Alamos Transportation Board (beginning in summer 2001) and spoke with authority about ADA issues. Kyle Zimmerman, retired Public Works Engineering Division Manager, credited June with promoting the access ramp to the performance platform at the former Municipal Building site. June was called upon by county traffic engineers to try out sidewalks, ADA ramps and curb cuts to assist the design process.

June smiled sweetly and spoke her mind. Her scootering around town with cheerful flag flying will be missed. June had worked for years to convince the county to install ADA access to Ashley Pond. LA Walks was honored to contribute to the design of an ADA access path from the Central Fuller lodge crossing to Ashley Pond in her memory. We wish she was here to try it out. She would have enjoyed sitting on the memorial bench along the ADA path overlooking Ashley Pond.

For your service and your friendship, we thank you, June.