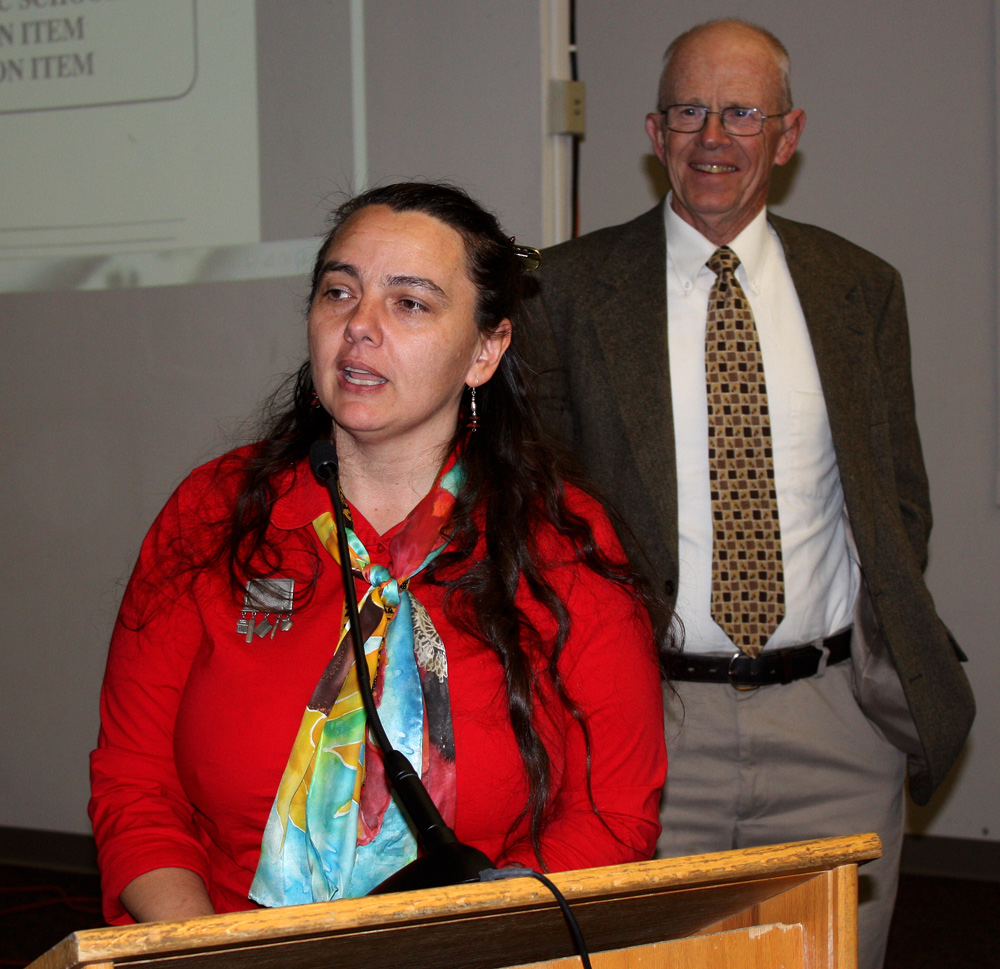 The announcement was made Tuesday at a surprise assembly at Chamisa by Superintendent Gene Schmidt. Torres was given special recognition at a meeting of the Los Alamos School Board Tuesday evening, where she received a standing ovation from the audience, largely composed of fellow teachers and principals.

“All of the things I do are because of the great teachers I have had,” Torres said. “You take what you have learned and expand on it.”

As National Teacher of the Year, Torres said she would affirm her belief that education is critical to the nation.

“While teachers need to continually strive to improve their teaching, I would hope that parents and the community would also increase their involvement as partners to support children’s education,” she said.

School Board Secretary Matt Williams, whose children were in Torres’ class, approached Chamisa Principal Deborah Smith about nominating Torres as Los Alamos Teacher of the Year. He said he was impressed by her ability to work with each student to inspire them and help them achieve their best performance.

“She’s always looking for a way to teach something new,” Williams said. “Ms. Torres is a teacher, not just for eight hours a day. She’s a teacher 24 hours a day.”

Smith praised Torres as a highly creative teacher who builds up everyone around her, both students and staff.

“Carolyn is a Master Teacher. She is a humble, kind, caring and high achieving educator. She is on my leadership team and serves as a math coach, helping other teachers find creative ways to teach math,” Smith said. “Torres is a gifted artist who brings those skills and her creativity into the classroom as well. She understands data, but she keeps it personal.”

Torres has taught at every level, from elementary through high school. She received a BA in chemistry and studio art from Williams College in 1990 and a master’s degree in secondary education with a math minor in 1992. She began teaching in Los Alamos in 1998 at Los Alamos Middle School and moved to Chamisa in 2005.

Some of Torres’ many achievements include serving as the New Mexico State Representative for the National PARCC PLD Committee developing Common Core standards for third-fifth grades, achieving National Board Certification three times and serving as a Master Teacher for the New Mexico Electronic Bridge Project for Outdoor Math and Science. She is a Mentor Teacher, a School Instructional Team Leader and a Math Coach.

A tireless worker outside of school hours, Torres worked with the Pajarito Environmental Education Center (PEEC) during the summer of 2013 to develop an outdoor science curriculum that she shared with all of the district’s third grade teachers. She is a member of Chamisa’s ECO team, which seeks to build a greenhouse at Chamisa to enrich science education. She is the sponsor of Chamisa’s Math Counts team and has organized Math and Science Nights for students and parents at Chamisa among many other activities.

“We’re so proud of Carolyn,” Smith said. “She’s a wonderful role model for kids. She makes everyone believe they are learning together.”