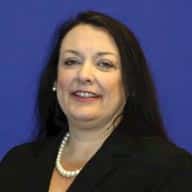 She describes the small-town atmosphere at LAMC as being one of the best aspects about working there.

“It allows me to get to know everyone personally … I came here from a hospital with more than 2,300 employees and it was hard to know more than a handful,” she said. “Here you can really get to know people and I enjoy that.”

LAMC Chief Executive Officer John Whiteside spoke about Radcliffe saying, “We are delighted to have a CNO of Sharon’s caliber and skill set join our organization and community. Her skills and leadership will help grow our commitment to the Los Alamos community.”

Radcliffe explained why she loves both nursing and teaching.

“My role is to mentor and coach the nursing leaders and clinical leaders within LAMC, so they can help their staff (nurses and other clinical people) to take great care of our patients,” she said. “Teaching is my passion and I enjoy nothing more than working with a team of leaders to help them reach their potential.”

Interacting with patients and nurses and getting to know them is important, she said, adding that nursing in 2018 is so much more than the clinical caring role, although that remains at the heart of nursing.

“Nursing leaders need to understand the clinical aspects of their role, healthcare strategy, finance and safe staffing, and helping them to learn this is one of my passions,” Radcliffe said. “Ultimately my role is to help to make LAMC a place where employees want to work, physicians want to practice and most importantly, that patients want to come for care.”

Radcliffe has worked for LifePoint for nearly 10 years in various roles. She explained that executives are often placed in various LifePoint Hospitals  and when the position came open at LAMC, she applied.

“I wanted to come back to the Southwest where I have worked before,” she said. “I met executive team and thought we would work well together. I am very happy to be here.”

Radcliffe was born and raised in Liverpool, England. She trained to be a nurse in England and said her first love is care of the critically ill and she spent six years between 1996 and 2002 as a critical care nurse in the Caymans.

She arrived in the U.S. in 2002 to go to work at Cleveland Clinic and University Hospitals of Cleveland, Ohio, before joining LifePoint. LAMC is her fifth LifePoint Hospital and she said that she really hopes she will get to stay here for a while. She has worked in Arizona, North Carolina, Michigan and now New Mexico.

“My husband Brian and I have a four-legged son named ‘Guinness’ and we live in Santa Fe because there are no houses available for us in Los Alamos,” she said. “We enjoy traveling, acrylic painting and spending time with friends.