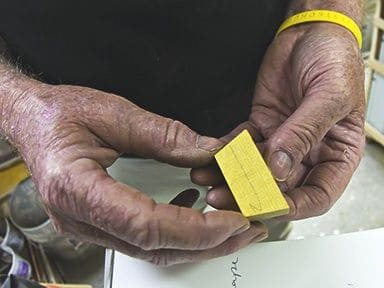 Soran is a retired nuclear engineer who first became interested in woodworking many years ago when he needed a relaxing hobby to help him unwind from his stressful job.

After retirement he brought his woodworking to a more artistic level by completing a two-year woodworking course at the Northwestern Woodworking Studio in Portland, Ore.

His first segmented woodturning was the result of an assignment where he was asked to create something out of the wood that was in the scrap pile. 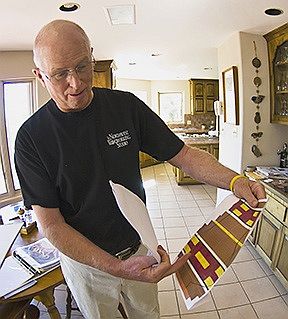 Master Woodworker Pat Soran discusses the plan he has for a project to create a wooden vase. Photo by TK Thompson/ladailypost

Each segmented woodturning begins with a simple drawing

During the design stage, he decides what shape the wooden vessel will be. He may use a plastic vase with a nice shape as his model. He works out the pattern and plans what types of wood to incorporate into the piece. His favorite types of wood are cherry, Bird’s-Eye Maple, and Mesquite.

The rectangles over the drawing represent the layers of wood. Each layer is like a pineapple slice, divided into segments.

A typical 13” vase has 31 rings. Each ring is divided into 12 trapezoids. Using simple geometry and a program called “Segment Planner,” Soran calculates the measurements of the individual segments of each ring.

Plans for a vase. Photo by TK Thompson/ladailypost

Cutting the wood to precise measurements

In the studio, Soran begins with a rough piece of board. Using a band saw he makes a flat edge and bottom so the board has four parallel sides.

He then uses a chop saw to cut the angles of the trapezoids. His plans tell him the length of the outside and inside of each trapezoid. When he’s finished the wedges need to fit together to make 180˚ half-rings, which are assembled using tight bond glue. Sometimes he needs to adjust things if the two halves don’t join perfectly. He then begins to stack the rings, one layer at a time.

As he adds the rings he uses a lathe to cut the inside of the vessel. Once the vessel is completely built he shapes the outside of it. He then makes it as smooth as possible by sanding it, starting with coarse sandpaper and working his way to fine-grade sandpaper. He applies a sealer or an oil finish.