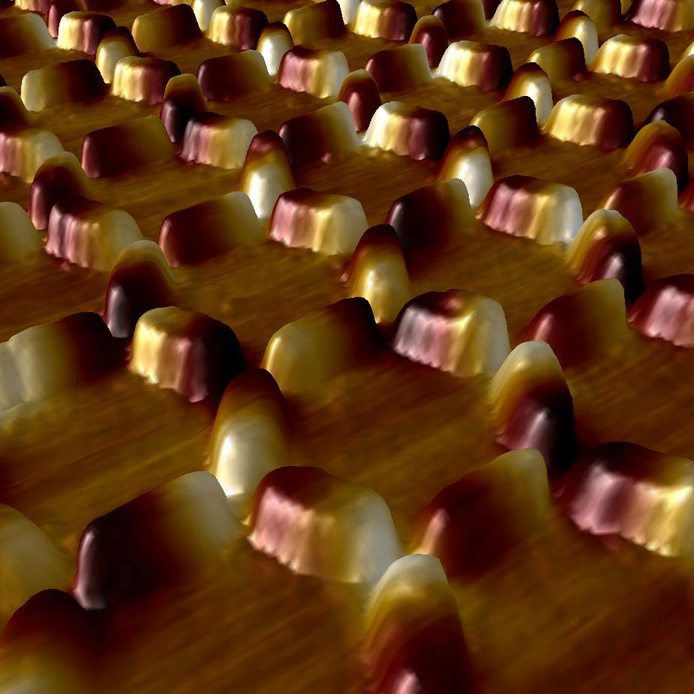 A 3-D depiction of the honeycomb artificial spin ice topography after the annealing and cooling protocols. The light and dark colors represent the north and south magnetic poles of the islands. Image by Ian Gilbert, University of Illinois Department of Physics and Frederick Seitz Materials Research Laboratory

A team of scientists has reported direct visualization of magnetic charge crystallization in an artificial spin ice material, a first in the study of a relatively new class of frustrated artificial magnetic materials-by-design known as “Artificial Spin Ice.”

These charges are analogs to electrical charges with possible applications in magnetic memories and devices; in describing this class of materials, the new work demonstrates their utility.

“The emergence of magnetic monopoles in spin ice systems is a particular case of what physicists call fractionalization, or deconfinement of quasi-particles that together are seen as comprising the fundamental  unit of the system, in this case the north and south poles of a nanomagnet,” Nisoli said. “We have seen how arranging magnets in a honeycomb configuration allows for these charges to be sort of ‘stripped’ from the magnetic islands to which they belong and become relevant degrees of freedom.”

The unique properties of spin ice materials have fascinated scientists since they were first discovered in the late 1990s in naturally occurring rare earth titanites. The material is aptly named: the highly complex ordering of nanoscale magnets in spin ice obey the same rules that determine the positional ordering of hydrogen and oxygen atoms in frozen water ice. Both have “spin”—degrees of freedom—with frustrated interactions that prevent complete freezing, even at absolute zero.

In 2006, an interdisciplinary team of physicists and materials scientists designed the first artificial spin ice, a two-dimensional array of magnetic nanoislands that are fabricated to interact in complex ways, depending on the chosen design of the array. The islands were lithographically printed onto a substrate, arranged in a square-lattice pattern, with the north and south poles of each nanomagnet meeting and interacting at their four-pronged vertices.

Now the same research team has developed a new annealing protocol that allows the artificial material’s full potential for highly complex magnetic interactions to be realized. The new protocol was applied to two artificial spin ice materials, one configured in a square-lattice pattern, the other in a hexagonal-honeycomb pattern with three-pronged vertices.

In the honeycomb pattern, where three magnetic poles intersect, a net charge of north or south is forced at each vertex. The magnetic “monopole charge” at each vertex influences the magnetic “charge” of the surrounding vertices. The team was able to image the crystalline structure of the magnetic charges using magnetic force microscopy.

“Nanomagnets are so small that their behavior becomes relatively simplem”University of Illinois physicist Peter Schiffer, who led the team, said. “We can arrange the magnets in a particular lattice pattern—square or honeycomb—and they interact in a way that we can predict and control.”

“The challenge—you have to get the nanomagnets to flip their north and south poles to show how they interact. It’s hard to force them to show the effects of interaction, since they get stuck in one particular arrangement,” Schiffer said.

The research team’s new annealing protocol—heating the material to a high temperature where their magnetic polarity is suppressed (here, about 550 degrees Celsius)—allows the nanomagnets to flip their polarity and freely interact. As the material cools, the nanomagnets are ordered according to the interactions of their poles at the vertices.

The collective thermal behavior of the arrays is studied through statistical mechanics, a branch of fundamental physics. As theorized, the monopole charge of each vertex was found to contribute to the order of the en tire system in a manner analogous to the interactions of electric charges at the atomic scale during water ice crystal growth.

An advantage of artificial spin ice is that it can be designed in different topologies, and examined subsequently to see the effects of those topologies. That allows physicists to explore a wide range of possible behaviors that are not accessible in natural crystals.

“This work demonstrates a direction in condensed matter physics that is quite opposite to what has been done in the last six decades or so,” Nisoli said. “Instead of imagining an emergent theoretical description to model the behavior of a nature-given material and validating it indirectly, we engineer materials of desired emergent properties  that can be visualized directly.”

The team’s research, led by Schiffer, also of the University of Illinois’ Frederick Seitz Materials Research Laboratory, has published its findings in the Aug. 29 issue of the journal Nature. The theoretical work for this research was performed at Los Alamos National Laboratory under Nisoli and LANL Oppenheimer Fellow Gia-Wei Chern, and at Penn State University under Vincent Crespi and Paul Lammert.

The synthesis of the magnetic materials and the high temperature treatment was performed at the University of Minnesota’s Department of Chemical Engineering and Materials Science under Chris Leighton. The magnetic measurements and lithography were performed at Penn State University and the Frederick Seitz Materials Research Laboratory by graduate students Sheng Zhang and Ian Gilbert under the direction of Schiffer.

This research was supported by the U.S. Department of Energy and the National Science Foundation.