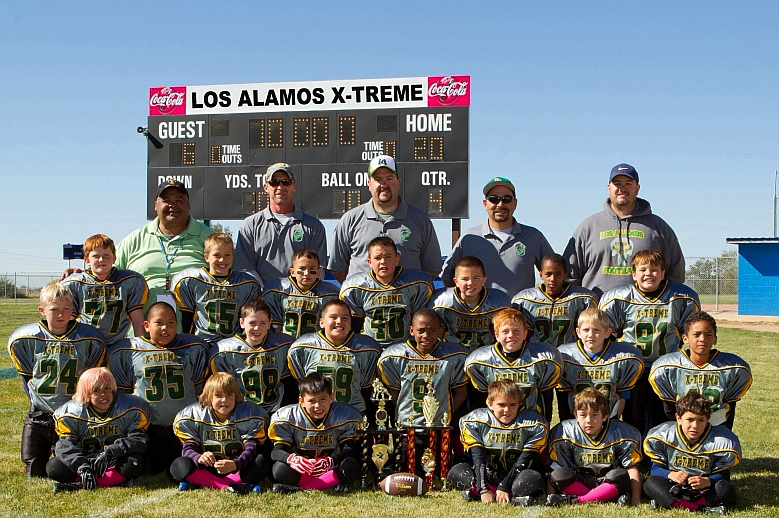 This championship game had the two best regular season teams facing each other. The 6-2 Bears were facing an undefeated 8-0 X-treme. Los Alamos started the scoring out with a 20 yard touchdown run to the corner by Jeremiah Hartzol, extra point was not converted, Los Alamos 6-0.

Both defenses were scrappy with the ball going back and forth multiple times on failed forth down conversions. The Trojans then broke thru with a 50 yard touchdown scamper to tie the score at 6-6. The Trojans then tried to run in a conversion and hit an Xtreme defensive wall and were stopped.

The score was tied at six until the middle of the third quarter when Jeremiah Hartzol ran a five yard power run up the middle and then Jeremiah the converted his own touchdown,  Los Alamos 14, Trojans 6.

In the fourth quarter, the Trojans were able to get to the Los Alamos 35 but then turned the ball over on downs. Los Alamos also was stopped on downs. The Trojans marched down to the Los Alamos 30 and relinquished the ball again on downs. Los Alamos got the ball with 5 minutes to go and marched to the Trojan 35 yard line. With seconds remaining, Jeremiah Hartzol ran a sweep to the sideline and took the ball to the house with the buzzer sounding as he scored his third touchdown of the day. X-treme earned the Chile Bowl Championship win with a 20-6 final score.

Los Alamos X-treme faced the Santa Fe Trojans in the semi-final game. The LA Xtreme’s defense was defiant and only allowed the Trojans one first-down the whole game. On the offensive side the offensive line was dominant and kept the Trojans at bay allowing the LA Xtreme to score 4 touchdowns on the ground. The touchdowns were scored by Luke Gonzales (2), Jeremiah Hartzol and Isaiah Hartzol. Jack Fisher had a perfect day kicking 4-for-4 on the PAT. Final Score was LA Xtreme 32, Santa Fe Trojans 0.

The Los Alamos Xtreme YAFL Division I Football Team had a stellar year. They were undefeated in regular season and playoff games and outscored their opponents 246-40. Being undefeated down the stretch was a looming task because every team wanted to unseat the top team. The LA Xtreme stood their ground and finished a perfect season with the Chile Bowl Championship ending up undefeated at 9-0.