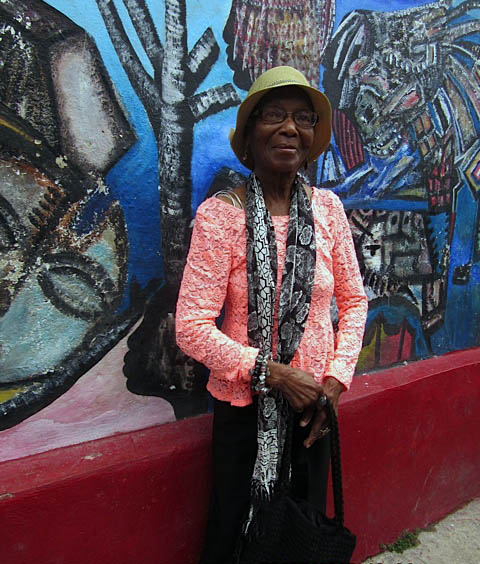 Confined by tourist tummy to my hotel on the 5th day of my trip to Havana, I discovered I was not the only one. Dona Edna Flaminguez, of our tour group, 92 years young, had the same problem.

Learning there was a hotel nurse, I gathered Dona Edna, and we both went to the nurse’s office.

He was a handsome young man of about 40 something—Pedro Gonzales. We both briefly described our symptoms, and he spoke English fluently enough that we communicated. Then, he was looking for a word, and Dona Edna started speaking rapid-fire Spanish. He had a good laugh at himself and her for letting him struggle. She said, “Well, you started speaking English, so I did, too.”

Dona Edna grew up in Panama, moved to the U.S. and retired as a social worker in New Jersey. After living a number of years in Puerto Rico, she moved back to New Jersey. She makes three trips a year to Africa, where she goes with a mission group that does cataract surgeries.

The nurse sent us back to our rooms and called the doctor, a young Black man with very fluent English, and in about 20 minutes, he came with the doctor to visit each of us individually. They prescribed an antibiotic and electrolyte powder for both of us, called a service to have it delivered, and in about 15 minutes the nurse brought it to administer. They told us what to eat and what not to, and prescribed lots of water.

After our naps, I went to check on Dona Edna, who had had nothing to eat all day. She was feeling weak but decided part of it was lying around in bed. We ordered two cups of soup.

Over our soup in her room, Dona Edna recalled growing up in Panama, and how she became the town crier when she was a girl. Her father would work all day building the Panama canal, then around 4 p.m. all the men would come in. She was about eight years old at the time.

The men would sit around a big square courtyard, kick back with their cigars, and her father would call her to read the newspapers for all of them. She would read three. Her father’s chest would puff out. Of course she loved that, but she was also a little girl and wanted to be out playing. She would try to skip over certain sections she thought she could get away with. It never worked.

“Read that again–that didn’t sound right,” one of them would always say.

Everyone fell in love with Dona Edna. The maid on her floor went home, made homemade soup, filled with native healing herbs and vegetables and brought her the whole pot of it the next day.

I was only out for a day and Dona Edna for two. The soup must have worked, though, as our favorite member joined us the day after.