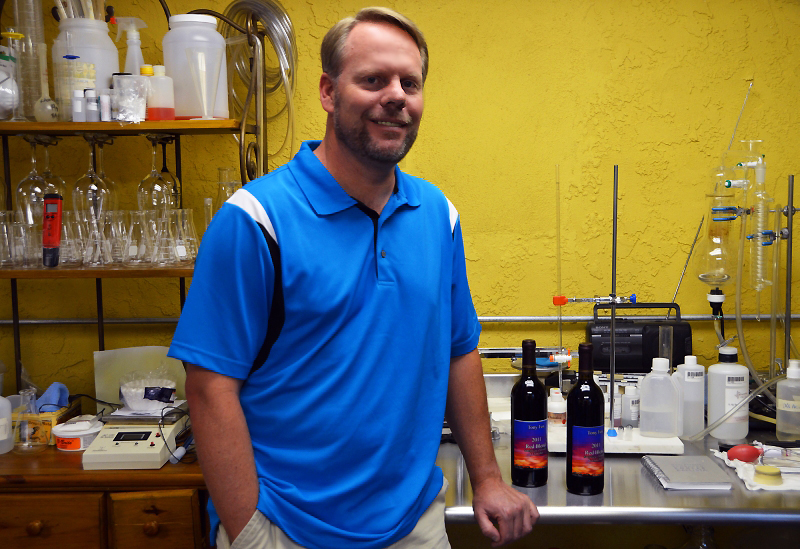 Tony Fox in the basement of his White Rock home where he created his award winning ‘Red Blend’ wine. Photo by Carol A. Clark/ladailypost.com

A friend tasted his “Red Blend” wine and suggested Fox enter it and it wound up medaling in the “miscellaneous red varietals vinifera” category. Fox describes his winning wine as a blend of vinifera – the traditional Mediterranean grapes, which he said make the best wine.

“There is something really good about this wine,” Fox said. “I knew we had something special when we bottled it and that is for me the impetus to make even more … I know I have it in me to keep doing it, to keep learning and growing.”

Fox, 43, explained that in entering the competition, he wasn’t expecting to win, but rather saw it as an opportunity to see where his wine ranked.

“It was the first time I’ve ever entered a state fair so I was happy to get this recognition from my peers and experts in wine production … now I know I’m headed down the right path,” he said.

Fox recalled that his interest in wine began in 1999 when a friend started a winery in Colorado and placed him in charge of marketing. He took a crash course in wine making. A year later, his wife Suzette took him to Napa to celebrate his 30th birthday and he was hooked.

“I find it to be a fun hobby because if you make a good wine inevitably you’re going to make people smile. I love sharing their reactions,” he said.

Fox was born in Madison, Wisc., and raised in Los Alamos after his father got a job at the Laboratory and the family moved to town in 1982. His mother taught computers at the local elementary schools. Fox moved to Colorado for eight years and returned 12 years ago. He heard about local winemaker John Balagna, introduced himself and the two became friends.

Balagna grew up making wine with his father and grandfather. After retiring from Los Alamos National Laboratory, he started the Balagna Winery at his home in White Rock. He mentored Fox for five years on the finer points of wine making.

“I learned from one of the best. I started making wine with John in 2002 and was his assistant until he retired in 2007,” Fox said. “During my years with him, I learned a tremendous amount about the chemistry of wine and that I prefer to make wine as opposed to grow grapes. One thing I’ve learned about wine is you must have a sophisticated palate, excellent fruit, and lots of experience failing making wine and learning from those failures, and a little bit of luck.”

In his day job, Fox drives to Espanola to manage the Los Alamos Employees Scholarship Fund in the Scholarship Program Office for the LANL Foundation. He also owns a minority share in a wine venture in Belen. He and partner Tony Black have obtained their winery license from ATF but are waiting to get their label approved.

He met Black about five years ago when Fox sold him some wine making equipment. Black grew up in Belen, spent years working in Denver and recently moved back to Belen to open the wine production facility, which will eventually include a tasting room.

The operation up to now has been a family affair. His wife and daughter Lily, 9, are his bottling crew. Last weekend, Lily helped her dad bottle 56 cases of Chardonnay, he said, adding that there’s a time each year when friends gather together with the Fox family and everyone crushes grapes.

“Winning the bronze medal is a great honor but I know in the world of wines, I feel pretty insignificant when I walk into a grocery store and see the variety of wines on the market,” Fox said. “I’ll probably always be an amateur professional wanna be winemaker … but it’s something I love doing.”