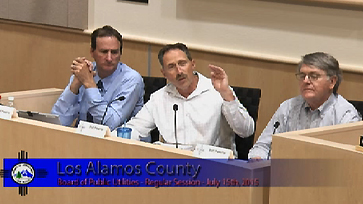 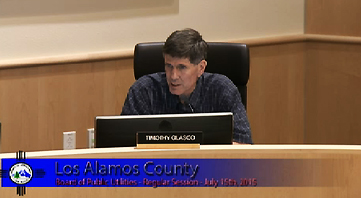 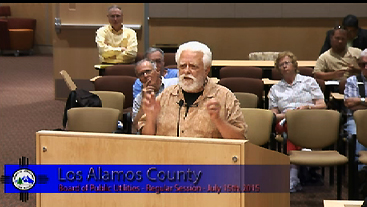 Resident Robert Falco raises concerns of potential liability from contamination by the plant into the San Juan River and mine. He encouraged the board to exit the agreement: ‘Cut your losses when it’s easy.’ Screen Shot/LAC

The Board of Public Utilities voted 5-0 to approve the San Juan Generating Station Settlement Agreement this evening during its meeting in Council Chambers.

Los Alamos County is one of nine participants in the San Juan Generating Station. The San Juan Project Participation Agreement (SJPPA), which defines the County’s ownership and responsibilities in the San Juan Plant, would normally expire June 30, 2022.

Following a decision to retire two of the four units at this coal fired plant and retrofit the remaining two with emission reducing technology, four of the nine owners decided to exit the plant. The County has a contractual obligation to stay in the agreement until 2022 and would be fined some $2 million in fees to exist early, not to mention the debt service.

The agreements lay out the financial obligation for the environmental upgrades, decommissioning and mine reclamation for all nine owners, as well as restructuring of ownership for the remaining two units for the participants in the plant after Dec. 31, 2017.

They said that restructuring the ownership of the SJGS presents an opportunity for the County to secure a clear off-ramp from the project that is both economical and aligns with DPU’s goals of being carbon neutral by 2040.

This agreement also will mean some $15 million in fuel savings to Los Alamos County with no significant increase in liabilities, Cummins said.

Several citizens spoke during public comment and urged the BPU to exit the agreement and pay the fees or penalties. Vice Chair Stephen McLin chaired this evening’s meeting and attempted to hold the ardent citizens to three minutes.