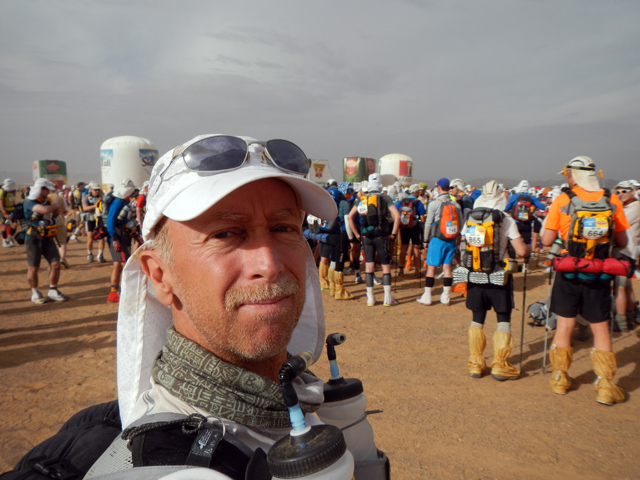 Garth Reader of Los Alamos prepares to set off for a day of running in the Sahara Desert. Courtesy photo 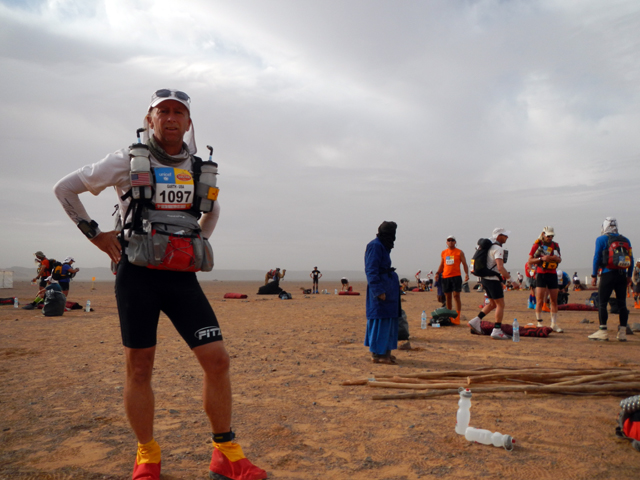 Garth Reader of Los Alamos and other racers strike camp in the Sahara Desert. Courtesy photo

The Marathon Des Sables has wrapped up and one of its participants, Garth Reader of Los Alamos, could not be more pleased with his results. Reader finished the ultra race 110 overall and ninth in his division. The week-long race, which began April 7, had him trekking 156 miles over various terrain in the Moroccan Sahara Desert.

“I was totally satisfied with my performance,” he said. “I exceeded all my goals that I had set in my mind.”

He explained a typical day on the race course would be: waking up as the sun was coming up then eating breakfast and packing up equipment. Water rations would be picked up and the tent that he slept in for the night would be knocked down. Reader would then proceed to the race’s starting line for that day and would receive briefings about the day.

He would begin running/walking around 8:30 a.m. or 9 a.m. Reader would run for about four to six hours a day, stopping at various checkpoints. The tents would then be setup for the night, giving him some time to relax. A true treat, he said, was receiving a cup of tea when he had completed each day’s portion of the race.

Dinner would be fixed, email would be checked, and by 8 p.m. or 9 p.m., Reader would be asleep. What he enjoyed about the race was not just successfully crossing the finish line but also taking in the beautiful landscapes and interacting with his fellow racers.

“The challenge was just to make sure I paced myself early on and not overdo it too soon,” Reader said.

One particularly trying day was the stage four day, or the longest day of the race. Reader had to cover 47-48 miles in 145 degree heat. “It was hot,” he said.

Not only was it hot but Reader needed to run in the desert’s sand dunes. “That day had a lot of sand,” he said.

Still, Reader’s training and preparation paid off. “I believe not only was my training pretty spot on but my equipment worked out great,” he said. “Everything came together.”

While the race organizers supplied water and tents, Reader had to carry everything else. Before leaving to go to Morocco, he estimated he would carry about 19 pounds.

How did Reader feel when he crossed the finish line?

“I felt I was happy to be across the line; happy to see my wife there; and looking forward to getting a shower and sleeping in a bed,” he said.

Reader’s running shoes may be off, but not for too long. He will compete in the Jemez Mountain Trail Run May 25 and may compete in another ultra-race, or multi-day race next year.