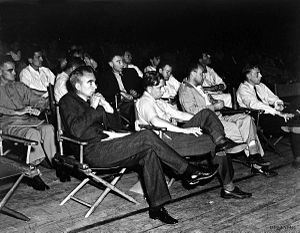 Physicists at a Manhattan District-sponsored colloquium at Los Alamos in 1946. Front row from left, Norris Bradbury, John Manley, Enrico Fermi and J. M. B. Kellogg. Robert Oppenheimer, in dark coat, is behind Manley; to Oppenheimer’s left is Richard Feynman. Courtesy/wikipedia

The series is set against the backdrop of the greatest clandestine race against time in the history of science – the mission to build the world’s first atomic bomb in Los Alamos – and follows the brilliant but flawed scientists and their families as they attempt to co-exist in a world where secrets and lies infiltrate every aspect of their lives. “Manhattan” will premiere on WGN America in July.

“I’m excited that this series will highlight New Mexico’s celebrated history and our amazing, picturesque landscapes – I can’t wait to watch it,” Martinez said. “Furthermore, the fact that they have chosen to film right here in New Mexico demonstrates that we remain competitive in recruiting films and TV series to our state.”

The New Mexico Jobs Package – which Governor Martinez signed into law last year – increased incentives for television series by 5 percent. This brings the incentive to 30 percent for long-running series that hire professional crews and employ New Mexicans for longer periods of time.

“Manhattan” will be produced by Tribune Studios, Skydance Television and Lionsgate Television. The production will employ about 200 New Mexico crew members, as well as more than 3,000 resident actors and background talent over the course of the series.

“We are extremely pleased to welcome the producers of ‘Manhattan’ to New Mexico,” said Nick Maniatis, director of New Mexico State Film Office. “With them, they bring a story that touches on our state and nation’s history, and we look forward to providing them with top notch crew, facilities, and vendors to aid in the telling of their story.”

The lot where “Manhattan” will do much of its filming is on state land, acquired from the City of Santa Fe, and designated strictly for economic development projects.

“Manhattan” stars John Benjamin Hickey (“The Big C,” “The Good Wife”) as Frank Winter, the brilliant but self-destructive professor who is commissioned to help lead the Manhattan Project; Olivia Williams (“Dollhouse”) as Liza Winter, a brilliant botanist who accompanies her husband Frank to Los Alamos; Daniel Stern (“Home Alone,” “Home Alone 2”) as Glen Babbit, a mentor to the younger scientists who helps navigate the political minefield of Los Alamos; Ashley Zukerman (“Rush”) as Charlie Abrams, a brilliant wunderkind who uproots his wife and young twins to move from the East Coast to work on the Manhattan Project; Rachel Brosnahan (“House of Cards”) as Abby Abrams, a privileged girl from the Boston suburbs who agrees to follow her husband Charlie to the middle of nowhere; Christopher Denham (“Argo,” “Shutter Island”) as Jim Meeks, one of the bright project members working under Frank Winter; Katja Herbers (“De Storm”) as Helen Price, one of the few female scientists assigned to the project; Harry Lloyd (“Game of Thrones”) as Paul Crosley, an ambitious Oxford-educated member of Frank’s team; and Alexia Fast (“Jack Reacher”) as Frank and Liza’s 16-year-old daughter Callie Winter.