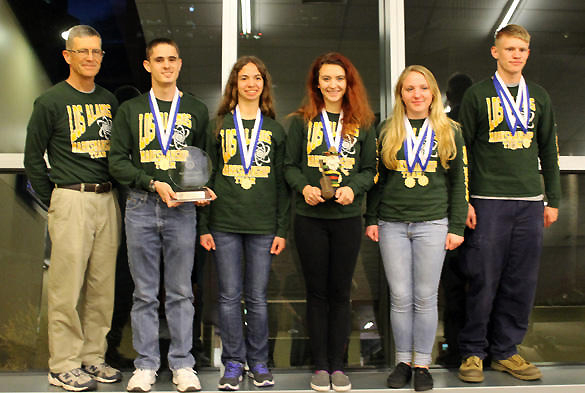 Individually O’Neill placed second nationally, Miller ninth and Wolfe 10th. In the regional results, O’Neill placed first, Miller second, Wolfe third, Hayes fifth and Murphy ninth. The team had an unprecedented four of their shooters make the finals match for the Navy with O’Neill, Miller and Wolfe taking the top three spots and Hays finishing in a tie for 4th.

This is the second time team coach LCDR Wes Shumaker has led a team to a national win. Miller’s brother, Cory, was on the first LAHS team to take the championship in 2012.

The cadets were invited to participate in the national competition following their success in the JROTC Postal Competition in which more than 11,000 ROTC cadets participated. Shooters from throughout the country were issued official targets to be fired upon at their home ranges and returned to the Civilian Marksmanship Program for scoring.

The top teams and individuals were then invited to one of three regional championships at Camp Perry, Ohio, Anniston, Ala., and the Phoenix venue.

Shumaker noted that team members practice a minimum of three times a week before or after school at the LAHS range.

As well as the precision team, Shumaker coaches the LAHS sporter shooters and a small-bore rifle team for the Los Alamos Sportsman’s Club.

The team has an automatic invitation to the National All-Service Junior ROTC championships in March at Camp Perry, Ohio. In addition, due to her high finish individually, Holly Hayes will receive an individual invitation as well.