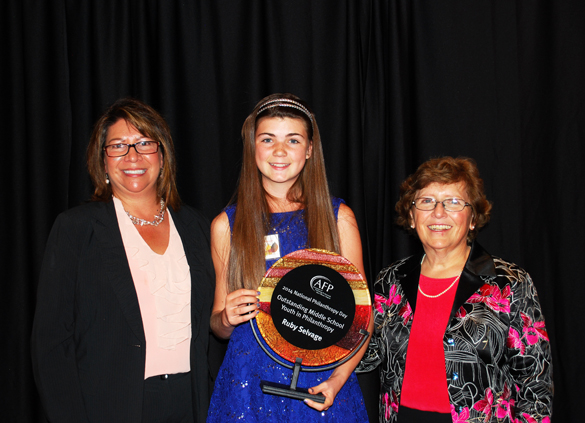 Los Alamos High School freshman Ruby Selvage has been named the 2014 Outstanding Youth in Philanthropy from her middle school endeavors and involvement by the Association of Fundraising Professionals-New Mexico (AFP-NM) and the Young Nonprofit Professionals Network (YNPN).

Selvage was honored for her work during a special luncheon Nov. 5 at the Embassy Suites Hotel in Albuquerque.

Selvage finds many ways to help others. She has donated her hair twice, helped build three homes in Juarez, cleared land for a community garden, personally encouraged her friends to bring stuffed animals instead of presents for her birthday so they could be donated to Stuffed Animals for Emergencies, participated in local trash pickups, volunteered for fundraiser dinners, participated in fun runs to raise money for the local animal shelter, painted bowls for Empty Bowls Fundraiser, and raised money for Los Alamos Arts Council by drawing on the sidewalk.

“Ruby loves helping others and hopes her efforts will cause others to step up and make a difference,” her mother Kim Selvage said.

Her daughter also participates in community fundraiser events. Selvage together with a friend received a Community Impact Award for their research on ways to prevent bullying. They spent almost a year trying to get their message out to encourage everyone to be a frally (Friend and an Ally). They were even invited to speak in front of the Los Alamos Board of Education about their project. Their “Make a Difference, Be a Frally” video has more than 1,000 unique views. https://www.youtube.com/watch?v=TaR-VvRv7aM.

“It is often said that we should look to the young to lead the way. Such is the case for Ruby Selvage, an eighth grader at Los Alamos Middle School. This young lady exudes a DNA molecule that speaks well of her philanthropy.  In offering these thoughts, I share that Miss Selvage both visibly and actively serves as a positive philanthropic role model for volunteerism and leadership.

Dating back to her first grade year in school, Miss Selvage consistently demonstrated a special compassion for her fellow students and those in need of assistance. An unselfish act, donating her hair to “Wigs for Kids” drew good will in the community and a huge smile from the young beneficiary. As a fourth grader, she encouraged friends to donate stuffed animals in lieu of a 10th grade birthday present. Over 100 (10 times her age) stuffed animals were donated.  Continuing with her hair theme, she again donated her hair as a fifth grader.

Philanthropy is more than giving possessions, Miss Selvage also gives of herself. I observed this most visibly through her defense of those most in need – the students who were bullied. She made it a personal cause to expose bullying in her elementary school’s playground as a sixth grader. As part of a Supercomputing Challenge, Miss Selvage first documented the number of bullying incidents on the playground and then developed a software program that extrapolated the amount of bullying that could take place without the positive intervention of students.

The results of the computer simulation, called The Bullying Effect, were dramatic. Her data showed that a single bully, if not corrected for her/his behavior, had the potential to do great harm to students. For some bullied students, she learned the harm becomes irreparable and could result in the victim dropping out of school. To counter the bullying issue, the Miss Selvage helped coin the phrase “frally,” which combines friend and ally. Miss Selvage theorized when frallies intervened in the simulation, victims’ self-esteem improved and the dropout rate reduced. Through this simple act of kindness, awareness grew in the school and district, leading to a changed behavior of hundreds of students and, in turn, a greatly reduced level of recess bullying incidents.

Participation in even greater acts of philanthropy consumed her seventh and eighth grade when she participated in home building projects for families in Juarez, helping to clear ground for community gardens, and serve as a fundraiser for the “House of Hope.”

The actions of Miss Selvage made a difference in many. Her acts of kindness, her willing to turn wrongs into rights, and her compassion for those most at need speaks well of her character and commitment to social justice. Real philanthropy comes in many forms. When one reflects on the actions of Miss Selvage, it is easy to see that her philanthropy is genuine because it comes from the heart.

In closing, I would strongly urge her selection as a recipient for the 2014 Outstanding Youth in Philanthropy. Her unselfish acts of changing lives one person at a time have left an indelible mark in our community.”