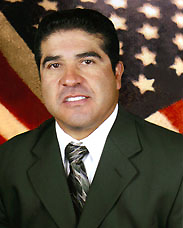 They shared with the staff three concerns:

One issue involves the fact that the Los Alamos County Council voted at its July 7 meeting not to allow Lucero to accept an official vehicle presented as a gift by Santa Fe County Sheriff Robert A. Garcia. The vehicle was slated for auction in Santa Fe.

“Sen. Carlos Cisneros is drafting a letter for us to Attorney General Hector Balderas seeking an opinion on the hierarchy of law between state statute and charter,” Lucero said. “Sen. Cisneros also will ask for an opinion from the attorney general on the state certified law enforcement authority of the county elected sheriffs in each of the 33 counties in New Mexico.”

Lucero also was interviewed today by KOAT Channel 7, which will air on the 10 o’clock news.