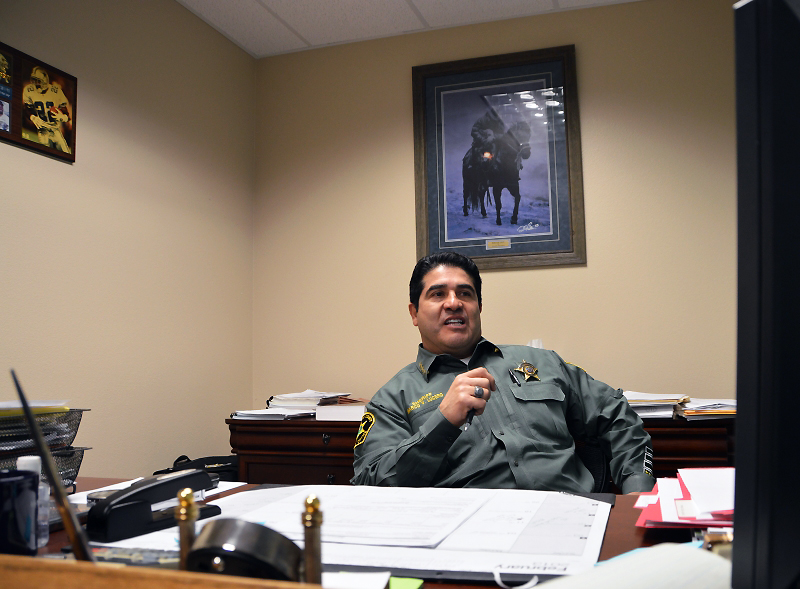 During an interview Wednesday in his downtown office, Los Alamos County Sheriff Marco Lucero participated in a Q&A with the Los Alamos Daily Post on gun issues plaguing the state and the nation:

Los Alamos Daily Post: President Obama has issued a series of Executive Orders designed to regulate firearms across the country. New Mexico House Bill 114 would have prohibited the enforcement of any new federal firearm laws that infringe on the 2nd Amendment right to bear arms, but was killed in committee, being declared unconstitutional by a 3-2 party-line vote. Were you one of the 30 county sheriffs who recently declared their intention to defend the 2nd Amendment against President Obama’s new Executive Orders?
Sheriff Lucero: Yes – in fact we ended up being 31 because one more sheriff later joined us, making it 31 sheriffs out of the 33 counties in the state who agreed we would stand by our oath of office to support and defend the Constitution of the United States … it’s not so much a gun issue as it is standing up for my oath of office and supporting the constitution.

Los Alamos Daily Post: Do you believe that the federal government has created unconstitutional laws that should not be enforced by your office?

Sheriff Lucero: My office will enforce state and local laws but an Executive Order is not law and such an order should only be enforced by federal officers. It’s not our job as sheriffs or police or state law enforcement officers to enforce federal law or Executive Orders. President George W. Bush signing the Patriot Act is an example of the federal government over-extending its rights … it is not right for officers to enter our homes or put wire taps on our phones without probable cause.

Los Alamos Daily Post: Would you like to see Los Alamos County adopt a resolution that urges the state to prevent federal interference with the purchase of certain guns, high capacity magazines and specific types of ammunition. (A similar resolution has been approved in Lincoln County.)

Sheriff Lucero: That is something I would have to study more before saying what I think Los Alamos County should do.

Los Alamos Daily Post: Do you believe that HB 114, the “Firearms Transfer Act” should be “untabled” and declared constitutional by New Mexico Attorney General Gary King, and passed into law?

Sheriff Lucero: Yes – that is one of the things that we sheriffs spoke to Gov. Susanna Martinez about in January, the day after this 60-day legislative session began. It is the responsibility of each state to govern themselves – not to completely disassociate with the federal government because there are some federal laws that need to be abided by – but states should in general regulate themselves.

Sheriff Lucero: I am for background checks at gun shows. You have licensed vendors there capable of conducting those checks. However, it’s just a petty misdemeanor for a vendor to not do a background check at a gun show. If you’re going to have a law and hold them accountable and ensure compliance with it – it’s got to have more teeth to it. I was against the private sales amendment to that bill, which was taken out, because it meant that even someone like me would have been prohibited from giving my own son one of my firearms. I believe that it is the responsibility of the gun owner to make sure that the person they sell their gun to is responsible and trained … the enforcement of private gun sale laws would have been impossible to do.

Los Alamos Daily Post: What is your stand on sales of guns to people with mental illness? Should this be better regulated?

Sheriff Lucero: Most definitely. This is the true issue here … if there is some way they can find to do it because this is where the problem really lies.

Los Alamos Daily Post: What is your stand on regulating high-capacity magazines and gun clips?

Sheriff Lucero: If you go down that path it will roll over to more and more restrictions. I don’t own an assault rifle but I support the right of people who do to go out and enjoy their sport. I believe the forefathers of this country didn’t have any restrictions and I don’t think we should have any restrictions other than for the mentally ill and convicted felons.

Los Alamos Daily Post: Do you support allowing gun permit holders to bring their guns into restaurants that serve liquor?

Sheriff Lucero: There’s a bill underway now that would allow off duty officers to carry a gun into a restaurant where liquor is served and I think the same should hold true for regular citizens – as long as either the officer or citizen is not drinking. Someone properly trained might be able to save lives … I’m all for their doing whatever they can to stop the action – to stop a person from killing people.

Sheriff Lucero: I think the atmosphere of alcohol in a bar is not the place to have guns.

Sheriff Lucero: I don’t think there is a reason to bring a gun on campus in K-12 schools where kids are unless you are in the performance of your duty.  I need to think about college campuses a little more but I think guns should be allowed at state parks because you’re in the wilderness or camping and may encounter a deviant person and need to protect your family.

Los Alamos Daily Post: Do you support arming teachers or other staff members at public schools?

Sheriff Lucero: I am for allowing any professional to get a gun and get trained but the risk is the teacher losing track of the gun or it getting in the hands of a student. I don’t think teachers bringing guns into the classroom is the answer to the tragedies we’ve seen across the country. I don’t believe this a gun issue as much as a mental health/deviant mind issue. Criminals are always going to find a way to get guns and if you restrict it – it’s going to make it tougher for law-abiding citizens to protect themselves and their families against those criminals.

House Bill 77, the “Firearms Transfer Act” passed Wednesday, Feb. 13 in the New Mexico House of Representatives by a vote of 43 to 26. HB 77 requires anyone who sells a firearm at a gun show to conduct a background check. It also includes a component for submitting mental health adjudication information to the FBI.

Bipartisan legislation was introduced Monday Feb. 11, to establish a lifetime ban on possession of a firearm or a destructive device for felons. HB 10 makes it unlawful for a felon to receive, transport, or possess a firearm or destructive device in New Mexico. Violation of this law would result in a fourth-degree felony in accordance of the Criminal Sentencing Act.

The definitions of a destructive device include: