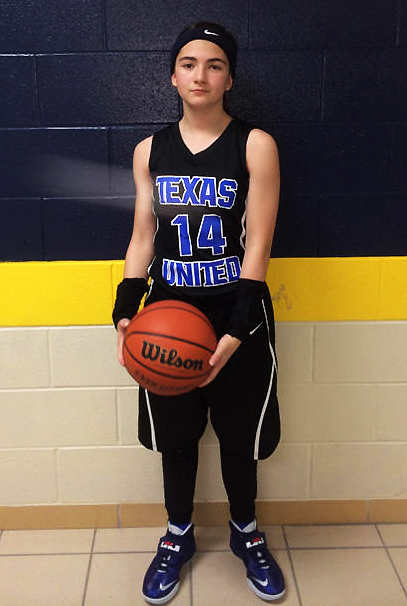 Isabel Montoya is 12 years old and about to spend the summer leading a big time life.

Her passion for basketball started when she was six. She was inspired by the 2012 USA Women’s Olympic Basketball Team and now after a combination of skills camps, practice and perseverance, she’s playing at a varsity level.

Just a few short weeks ago, Montoya graduated as a sixth grader from Aspen Elementary School and now plays for the Texas United Nike team out of Austin, Texas.

The team is one of 30 Nike basketball teams for their girl’s program. It allows Montoya to play several large national tournaments, one being an NCAA sanctioned event and allows her the potential to be seen on a large scale.

“My goal is to play basketball for a major Division 1 college – preferably Notre Dame,” Montoya said. “I believe my talent, hard work, dedication and heart will get me there.”

Another goal for Montoya is to raise about $2,500 as she travels to the following events across the country:

The way she hopes to do that is in part due to some fundraising efforts with the help of Hilltopper wrestler and brother Dominick with www.GoFundMe.com.

If things go well, the future middle school student hopes to make it all the way to the national qualifier July 28-29 at the Nike Nationals in Atlanta, Ga.

“July will be a very busy month, but Basketball on the Bayou in New Orleans is probably the biggest event,” Montoya said. “It is one of the few events that brings together national elite programs from Nike, Adidas and Premier Basketball. Three hundred teams will be competing with 400 coaches and scouts recruiting the event.”

While www.GoFundMe.com allows her to personalize a fundraising campaign, it also allows her to share the journey with the people in her life, her community and lets everyone keep up with her progress.

Those wishing to follow Montoya should look for Help Isabel Play Across the Country at http://www.gofundme.com/7bv3x4