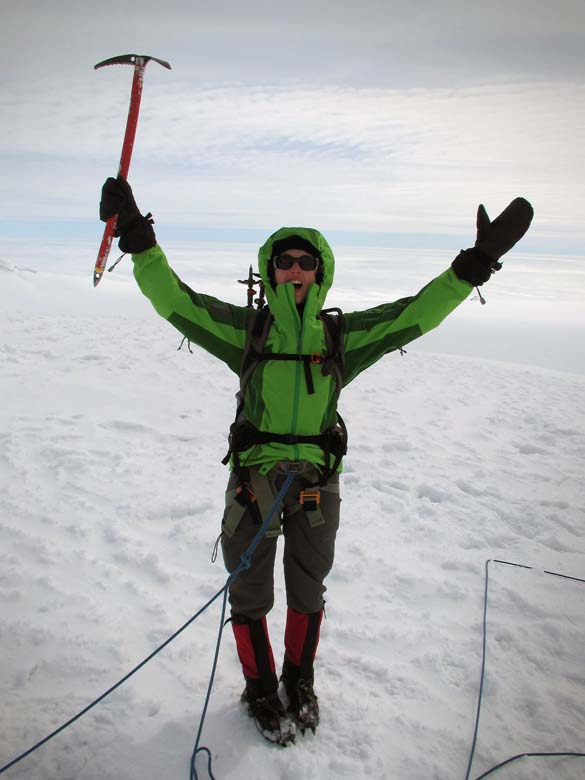 LANL scientist Nina Lanza at the summit of Hvannadalsnukur, the highest mountain in Iceland, practicing glacier travel techniques similar to those needed for Antarctic fieldwork. Courtesy/LANL

Nina Lanza, of Los Alamos National Laboratory’s Space and Remote Sensing group, was selected as one of eight members for the 2015-2016 field campaign of the Antarctica Search for Meteorites (ANSMET) program, which is supported by NASA.

“These meteorites can help us understand the formation and evolution of our solar system,” Lanza said. “They come from planets, their moons and asteroids. Few of these solar system bodies will be visited by NASA in our lifetimes and this is a superb opportunity to collect material from across the solar system without having to leave the Earth.”

The ANSMET program’s mission is to find and collect meteorites in Antarctica. Although meteorites land randomly all across Earth, Antarctica is the premier location for finding them because they are spotted more easily against the backdrop of the Antarctic ice. The meteorites are sent to NASA’s Johnson Space Center and the Smithsonian Institution for initial characterization, curation and distribution to scientists for further analysis.

This year marks the 40th anniversary of the ANSMET meteorite program, which has sent an expedition to Antarctica to search for meteorites nearly every year. More than 200 people have participated in the program since its inception, including six NASA astronauts, allowing for a broad scientific community to participate and understand the importance of meteoritic science that would otherwise not be possible

Nina Lanza is a staff scientist in the Space and Remote Sensing group at Los Alamos and a member of the ChemCam instrument team for the Curiosity Mars rover. Lanza is broadly interested in understanding the history of water on the surface of Mars. Using data from Los Alamos’ ChemCam spectrometer on NASA’s Mars Scientific Laboratory, she and her team discovered manganese-rich minerals that could only be formed with copious amounts of both water and oxygen, two key ingredients necessary for life.

The Antarctic Search for Meteorites program is led by Co-PIs Ralph Harvey and Jim Karner at Case Western Reserve University, and is a field-based science project that recovers meteorite specimens from Antarctica. Since 1976 it has recovered more than 20,000 specimens from meteorite stranding surfaces along the Transantarctic Mountains. These specimens are a reliable, continuous source of new, non-microscopic extraterrestrial material and support thousands of scientists around the planet as they seek essential “ground-truth” concerning the materials that make up the asteroids, planets and other bodies of our solar system.

The study of ANSMET meteorites has greatly extended researcher’s knowledge of the materials and conditions in the primeval nebula from which the solar system was created, revealed the complex and exotic geologic nature of asteroids, and proved that some specimens represent planetary materials delivered to Earth from the Moon and Mars.